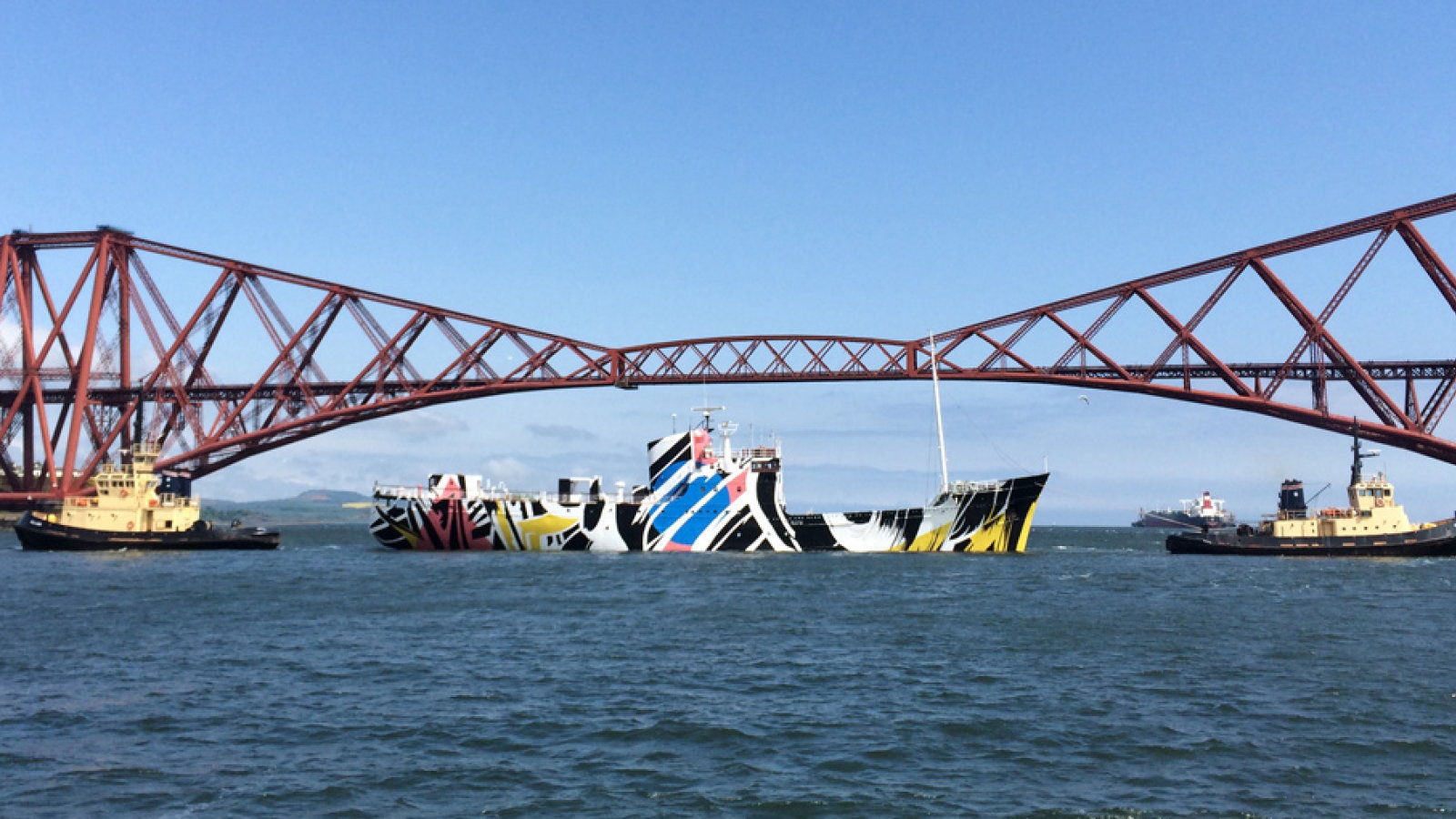 Designed not to camouflage, but to distort a ship’s appearance when viewed through a telescope, ‘Dazzle’ was developed by the British marine artist Norman Wilkinson to counter the threat posed by German U-Boats. Using strongly contrasting blocks of colour, stripes and curves, dazzle designs transformed ships into a confusing array of multi-directional shapes, making it difficult to gauge a ship’s direction or speed.  In developing her design, Phillips was drawn to the lesser known histories of women in the First World War. The vast majority of dazzle designs were devised by a largely female team working under Wilkinson in a dedicated department established in the Royal Academy, London; and across Edinburgh, Scotland and the UK, women entered the workplace in a wide array of roles (including as telegraphists and signallers) as part of the extended war effort.

Nominated for the Turner Prize in 2014, Ciara Phillips works mainly in the medium of printmaking, attracted both by the physical process itself, as well as the long established history of print as a medium for exploring and expressing political and social ideas. Often working on a large scale, Phillips has co-opted entire rooms as surfaces on which to apply her prints, bringing together multiple layers of individual images and repeated pattern in a single installation. Every Woman significantly expanded this approach, drawing on several of Phillips’ earlier screenprints to cover the entire surface of the ship MV Fingal with a riot of exuberant gestural sweeps in pink, blue and yellow across a background of black and white geometric forms down the length of the 72-metre (239-foot) ship.

Phillips also has a longstanding interest in signs and signals, and overlaid on the surface of Every Woman was an encoded message painted in retro-reflective pigment. Celebrating the ship’s former role as a lighthouse tender (for over 30 years, the MV Fingal worked to bring supplies to some of Scotland’s most remote lighthouses), Phillips’ message – Every Woman a Signal Tower – shone out through the darkness at night-time. The phrase was adapted from a naval commander’s book written in 1808 titled “The Homograph, Or Every Man a Signal Tower”.

The ship launched in May 2016 with a journey down the river Forth and had an estimated 461,000 visitors, becoming a firm favourite among Edinburgh's citizens – while also inspiring a host of other related work in the city, including a replica dazzle ship as part of the city-wide Edinburgh's Hogmanay celebrations and the family event Sprogmanay at the National Museum of Scotland on the last day of 2016.