Festival City Volunteer shifts are varied in the contacts and connections with the public as new team member Eimear Bush reveals - including a surprise encounter with a goat!

I read an article on the BBC news website reporting on an academic study published in the American Psychologist journal. Its conclusion: there are more Good Samaritans out there than we might think. It made me laugh, not because there was anything funny about it, rather because of our tendency to require research to confirm social norms that we can observe for ourselves, day in day out. I don't need research to tell me that it’s human nature to be helpful when I can take a walk down a street any day of the week and see it played out for myself. 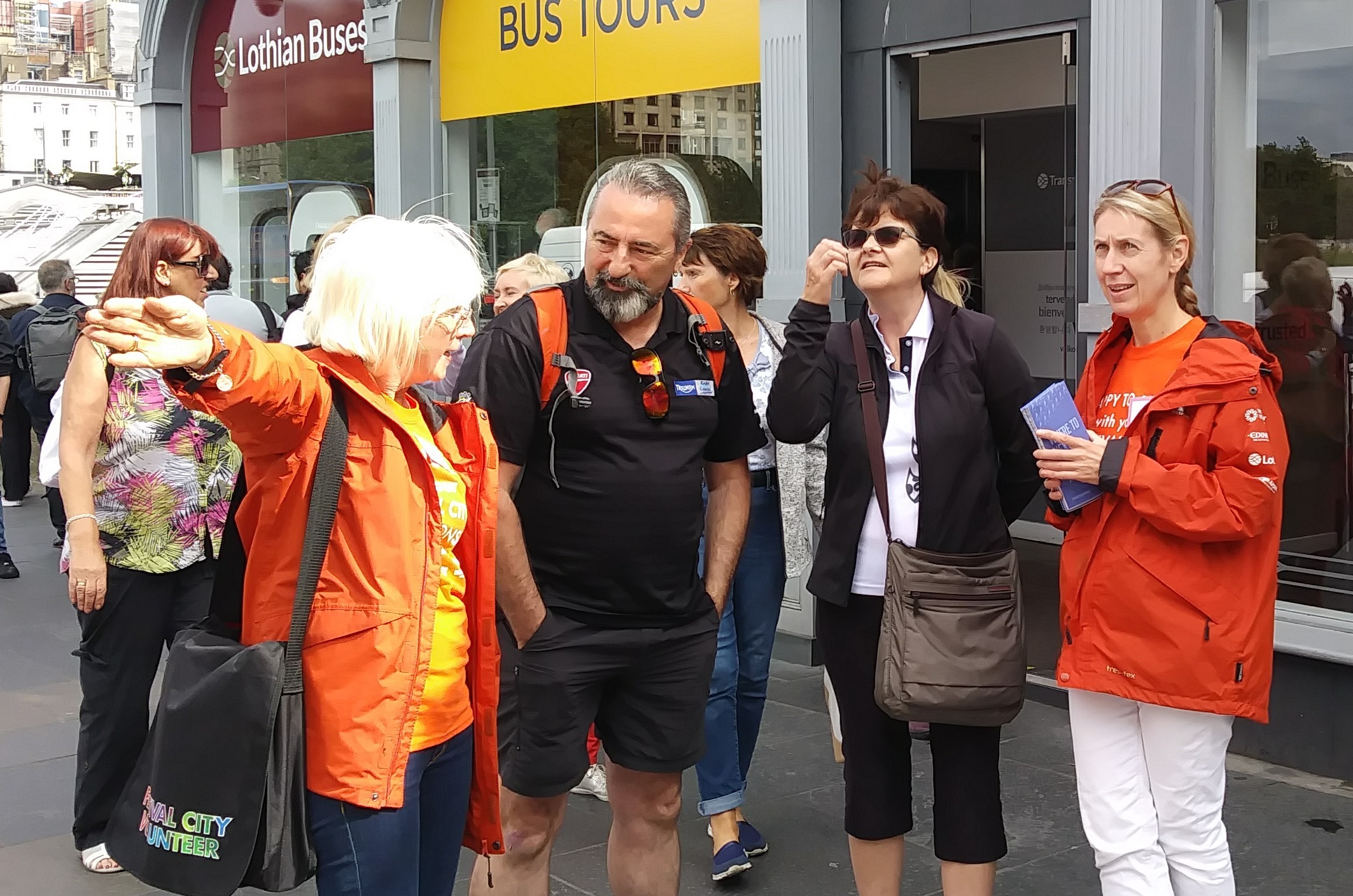 This particular research studied hundreds of incidents captured on CCTV around the world and concluded that the so-called ‘bystander effect’ - that people will not usually help a stranger in distress - is not as prevalent as news feeds might have us believe. Of course we are not a series of individuals going about our business in a bubble, disregarding the small everyday plights of others. Of course people step forward to help store a heavy bag in the overhead rack of a train; give up their seat on the bus if someone else looks as if they need it more; lift the end of a child’s pushchair as a mother struggles to negotiate the steps at Fleshmarket Close. When we don't stop to help someone in distress we override our basic nature and we know it from the squirming feeling we carry about inside us for the rest of the day. Intervention is the norm, especially if you are a Festival City Volunteer.

‘Look, darling, her t-shirt says we can ask her a question.’ she nudged her husband in the ribs, ‘I don't have one, do you?’. He didn’t. She looked disappointed, they walked on and I loitered some more. That was my first morning at a spot near the top of The Mound, from where I could almost - but not quite - see Edinburgh Castle. Quickly, I learned the most common question of the day was to be, ‘How do I get to the castle from here?’ Sometimes I think people just stopped for a breather, an excuse to rest, for, although it was a gift of a day for a month that can often feel autumnal, the combination of Edinburgh’s hills and the unexpected sun were exhausting the crowds. 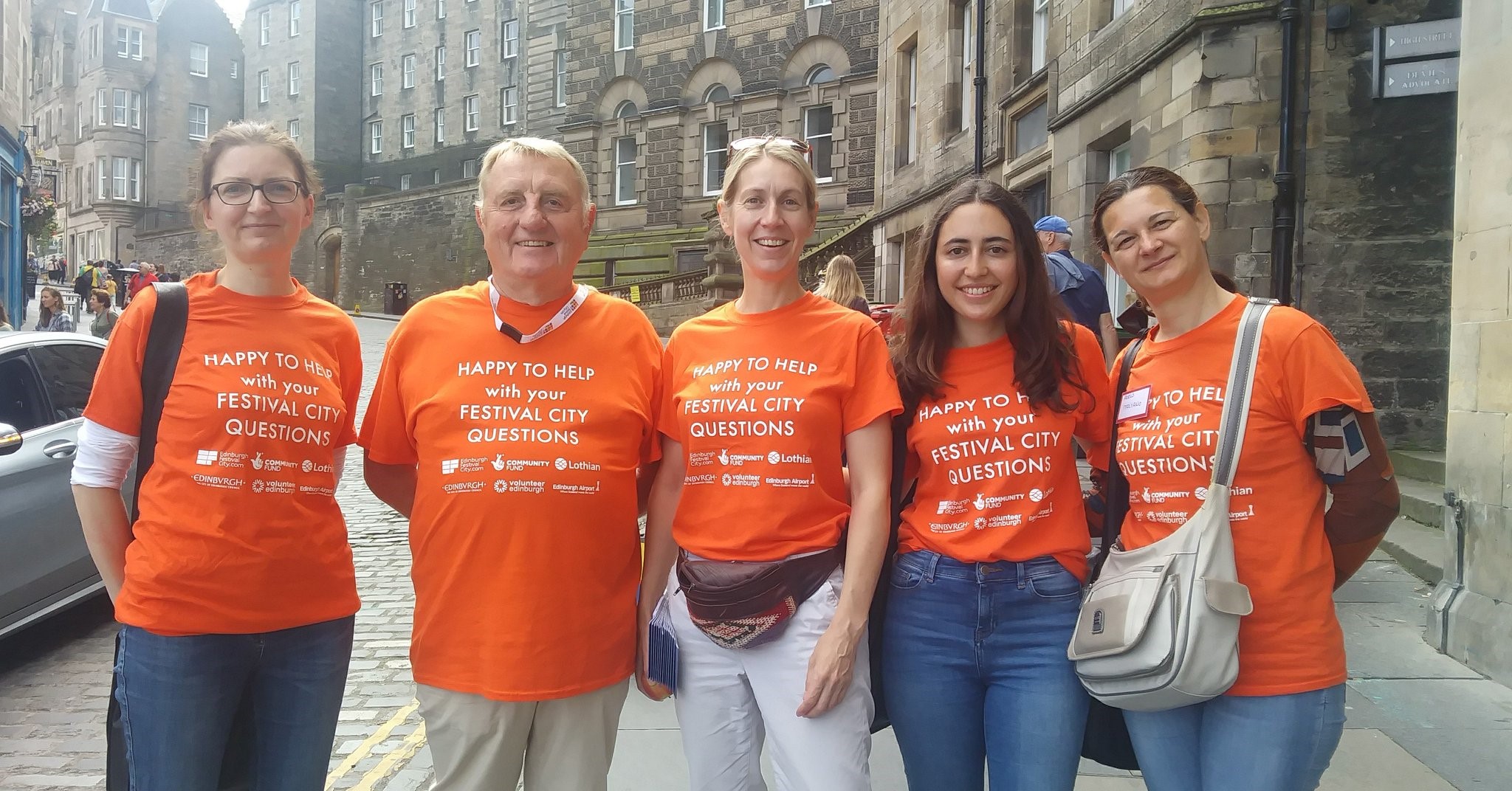 The questions came in waves. It seemed to work the same way as an empty café: as soon as you go in and take a seat near the window, the others tables are sure to fill up. So it was, no sooner had one person stopped to ask a question than another would stand behind, patiently waiting with theirs. Most queries related to the immediate area: ‘How do I get to the Assembly Hall?’ (we were standing next to it); ‘What’s the quickest way to Camera Obscura?’; ‘Is there a route to the Grassmarket avoiding the steps?’ A few wanted to stray from the beaten path – to Dean Village, to Stockbridge, to the Botanics.

A friendly Australian and his wife, wearing matching Hawaiian shirts, wanted to go to the Edinburgh Dungeon. ‘I’m going to leave him there,’ she said, smiling at him adoringly. Hot on their heels was the harassed man pushing a buggie who asked me, ‘Can you tell me how to stop babies crying?’ I assumed the questioner was the father, but his look was definitely not an adoring one. A particularly stylish lady was keen to find an outdoor food market where she could buy good artisanal chocolate. I told her I couldn't be sure on the chocolate but I knew where she could get excellent fudge, which is probably akin to offering pale ale to a whisky aficionado. She nodded kindly, but I could tell, despite her willowy frame, that it was chocolate alone she wanted. Two young women from Edmonton in Canada needed directions to the Palace of Holyrood House. Apparently there is a district in Edmonton also called Holyrood and they reckoned the name-twinning might give them a free pass to have tea with a Royal, should any be passing through.

I have enjoyed the enthusiasm and wonder that each day brings, that antidote to world-weariness we all so need. On Waverley Bridge I was directing an older American couple to a pharmacy, when the man swivelled on his heel and asked, in a tone of voice as if a star ship had just landed, ‘What is that?’ It prompted me to look up at the Balmoral Hotel with fresh eyes. After a couple of years of living here I had forgotten how splendid it is. I think it is especially breath-taking because it sits alone, magnifying its grand scale. ‘Could we get bowls of soup there?’ he asked, with an endearing dollop of innocence and excitement. I assured him that he could get whatever he wanted there as long as his wallet was fat enough. A bereavement support worker stopped to check the location of a venue showing a play about a wake. She looked apologetically to her husband. ‘Busman’s holiday,’ she explained, ‘I’m always dragging him along to cheery things about death!’

My best question of the festival, though, came on a lazy Sunday around midday as the city was waking up. ‘My goat and I are going to the airport,’ he told me, though this was a run-of-the-mill activity, ‘are we better going by bus or by tram?’ Sure enough, he had with him a well-behaved goat on a lead. I suggested the Lothian Airlink bus might be a better option, as it was just across the way and that it may be more suited to the goat, expert as I am (not) on goat travel. On the basis of this advice he set off for the bus, lifting little 'billy' and draping him safely around his neck, so they could safely cross Waverley Bridge.