New volunteer Eleanor Poole reflects on her role as a team leader within the Festival City Volunteers team. 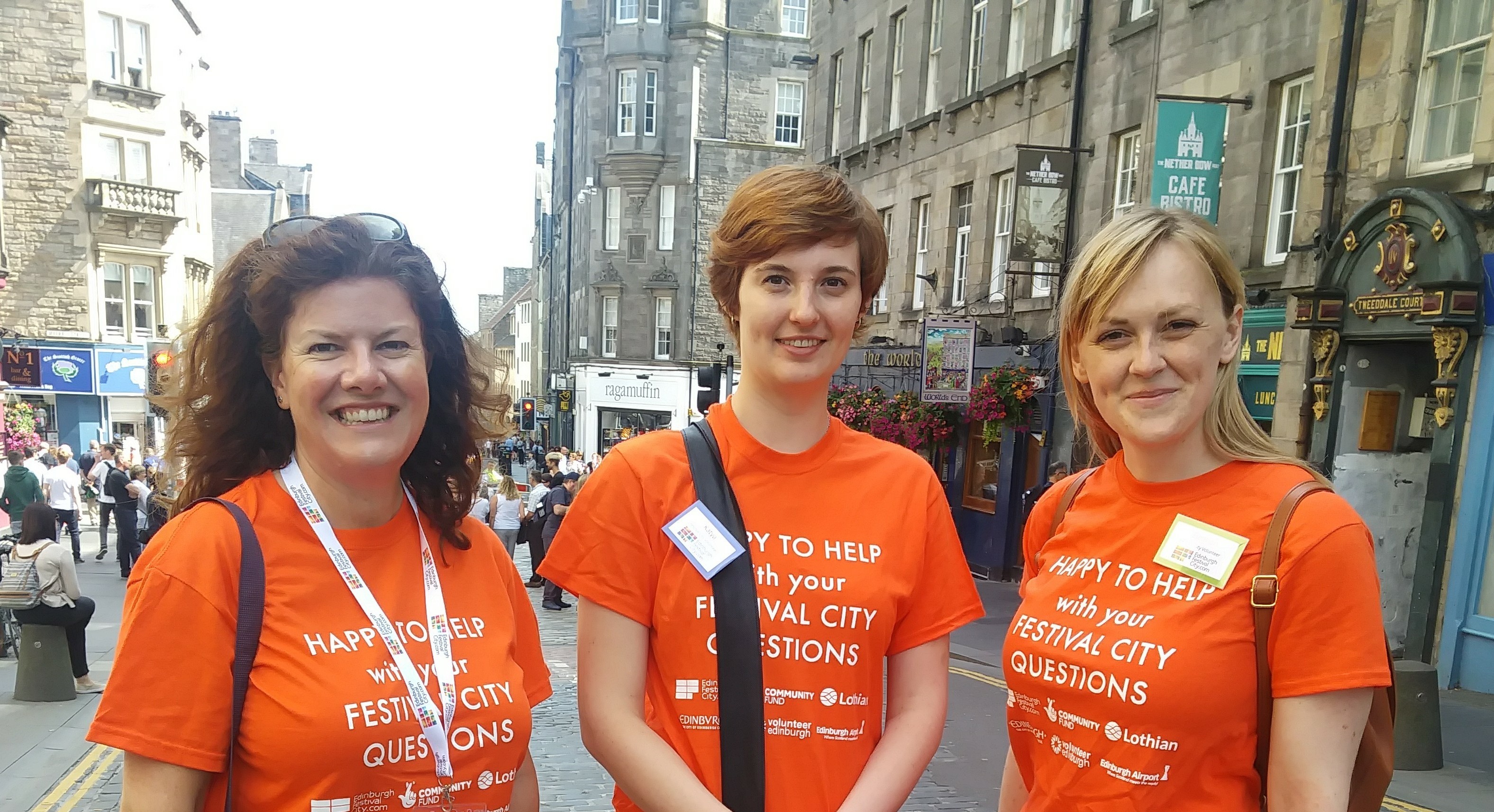 Over the last ten years or so of living in Edinburgh, I have gone through waves of loving the Edinburgh festivals to thinking they were sometimes one of the most frustrating aspects of living in this beautiful city. As much as I love seeing comedians and internationally renowned performers anytime of the day within walking distance of my flat, it is sometimes very stressful just trying to get to work and back without being flyered!

This year, I decided to do something about it and try and contribute to the festivals in a positive manner. I do often find myself helping visitors throughout the year, so I thought specifically helping people with their festival queries would be just as useful, especially as I have worked at the festivals before, and have previously volunteered at Glasgow 2014. 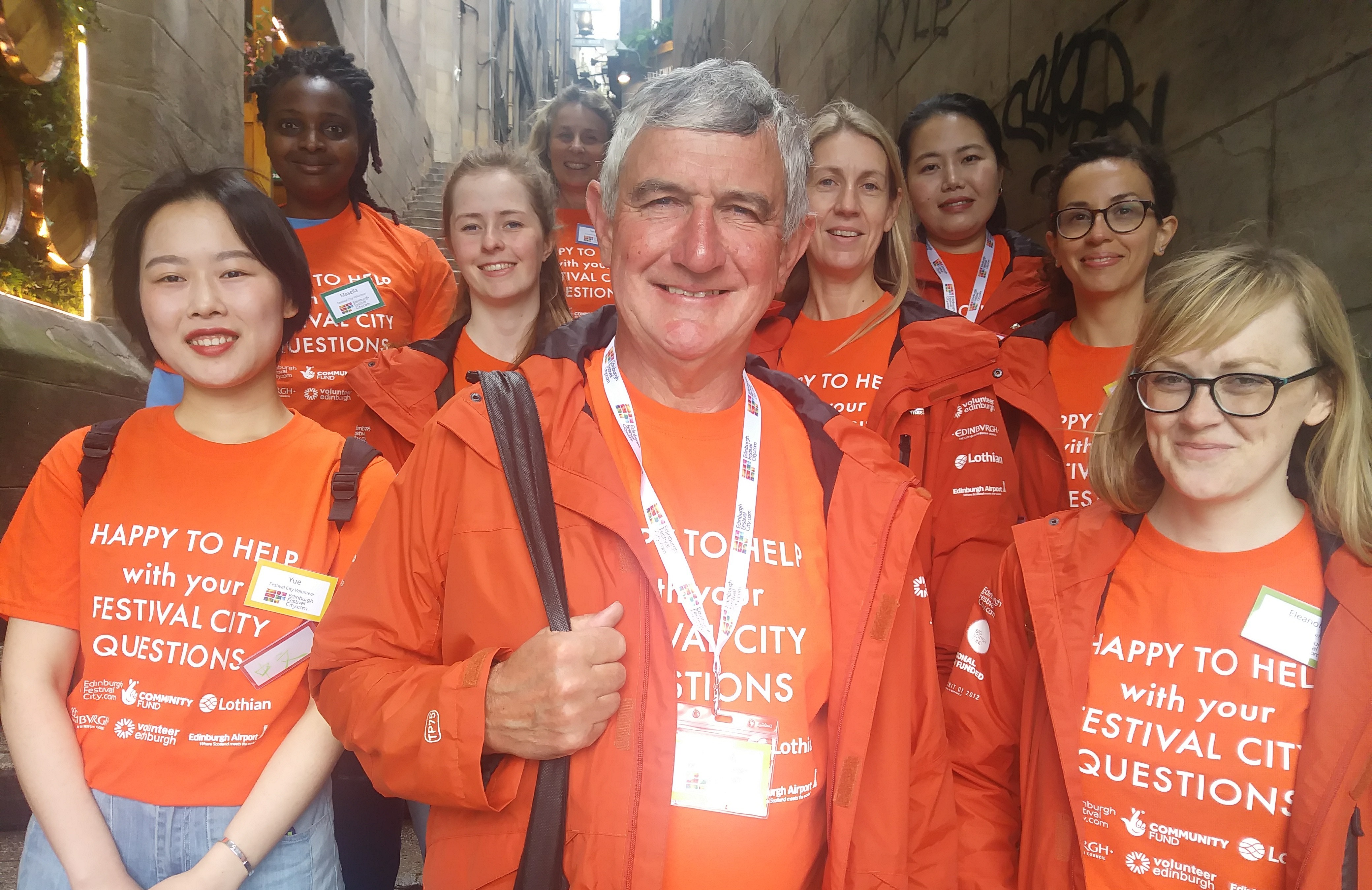 Ever since my first chat in mid-June about the role, I've found the whole Festival City Volunteers staff team incredibly warm and friendly, so well-organised and very eager to make our time at the festival the best it can be. During the training process I met many of the lovely volunteers, which made my first couple of shifts much less stressful as there were several friendly faces I recognised from this training.

I was asked whether I wanted to be a team leader for some of my shifts, which I (nervously) accepted. My first shift with FCV was also my first as a team leader, and I wondered whether my lack of experience would be obvious, especially to those who had volunteered before. But thankfully the team leader role is fairly similar to that of a normal volunteer, it's understated rather than obvious and if you were to see a group of us on the Royal Mile for example you wouldn't be able to pick out who's the team leader.

My main duties as a team leader are varied. I'm the first point of contact for the staff team to during the shift, and it's my responsibility to keep the group together and ensure that we are safe. With my team we decide on a visibility point to engage with the public and I also ensure that we all take breaks as the shift can be deceptively tiring. Tasks that don't seem onerous but they make the shift go smoothly.

On my first day it took a couple of hours to find a good spot as we tried several points, but once it was found, we felt much more relaxed, which meant we had many more people approaching us and we were therefore able to help as many people as possible.

The interactions we've had with the public have been so rewarding. Whether it's just helping someone pick up their tickets, pointing them to the nearest toilets, or suggesting places for them to have lunch, it's so lovely to see the smiles (and sometimes the relief!) as they get the information they need, or the recommendations they're after.

We've also spoken to a fair few number of people who've also just wanted to talk about their experiences here at the festivals, the shows they've got planned to see, and the festivals that have sprung up in their hometowns in homage to the Edinburgh Festivals.

Overall I've found my time as a Festival City Volunteer to be a great experience, meeting lots of lovely people I would never have previously had the chance to meet, and sharing my (sometimes very niche!) Edinburgh knowledge to visitors and other volunteers alike.

I would say that my love and appreciation of the Edinburgh Festivals is certainly growing, mostly due to the FCV staff and volunteers, but also the visitors I have met who have told me how excited they are to be here, and "aren't you lucky to live here?". I now certainly am starting to think so!