Challenge: How to enhance the place of national creatives across international festival programmes

This multi-million pound fund sought to help maintain the festivals' global competitive edge, increase the funding available to Scottish artists and practitioners, and encourage creative collaborations. A public announcement in March 2008 by Culture Minister Linda Fabiani declared that a £6 million fund over three years had been created to support new productions, events or exhibitions involving Scottish-based participants that premiere at any of the Edinburgh Festivals - noting that the fund could also be used to support touring of events or performances after their premiere at the festival and allow successful work to reach new audiences.

Resources of £1.308 million were allocated for the first year, with a panel comprising members of the Thundering Hooves steering group and Festivals Forum recommending the projects for funding. The then Scottish Arts Council was tasked with processing projects for the Expo Fund cash for all of Edinburgh's Festivals. The main role of co-ordinating and delivering the fund over three years went to Festivals Edinburgh.

The Expo Fund core criteria have remained the same since its creation in 2007. In order to be successful, applicants need to demonstrate that their proposals:

From 2013-14, it was highlighted that the fund was particular keen to encourage festivals to submit proposals which could tour further across Scotland.

An additional sum has been included in the Expo Fund since its inception, earmarked for Festivals Edinburgh with the objective of 'promoting and positioning Edinburgh as the world’s leading festival city' - an objective derived from Recommendation 10 [p48] of the Thundering Hooves report which stated that 'A joint festivals marketing strategy should be developed by Festivals Edinburgh members and their stakeholders and resourced by those stakeholders that have a strategic interest in Edinburgh’s continued pre-eminence as a festival city'.

The anecdotal basis for the foundation of the Expo Fund - that cultural discovery was one of the unique aspects of the festivals - was proven to be factually true in the Festivals Impact Studies of 2011 and 2016, when 80% of audiences agreed that the festivals gave them an opportunity to discover new talent, styles or genres.

Over the past 10 years, a total of £21m has been made available to the members of Festivals Edinburgh - the collective organisation for Edinburgh’s major international festivals - and 88% of that funding was invested for the beenfit of Scottish-based creative and the production/promotion of their work. Amongst some of the other results were: 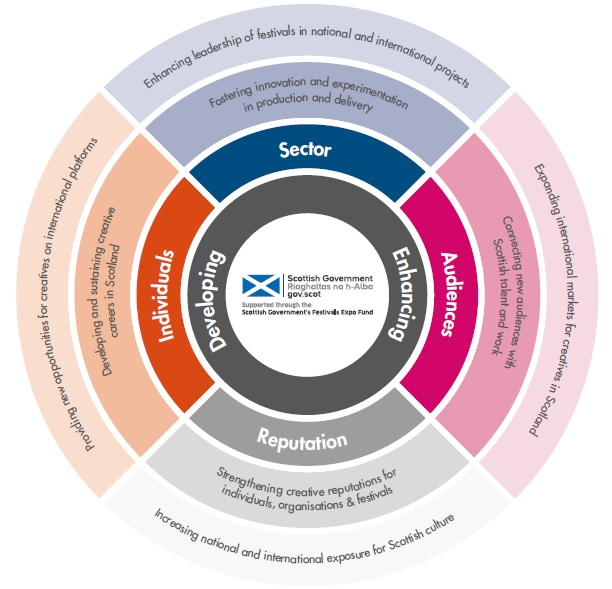 Beyond these generic outcomes and numbers, we can see the specific impact of the Expo Fund on creative professionals: 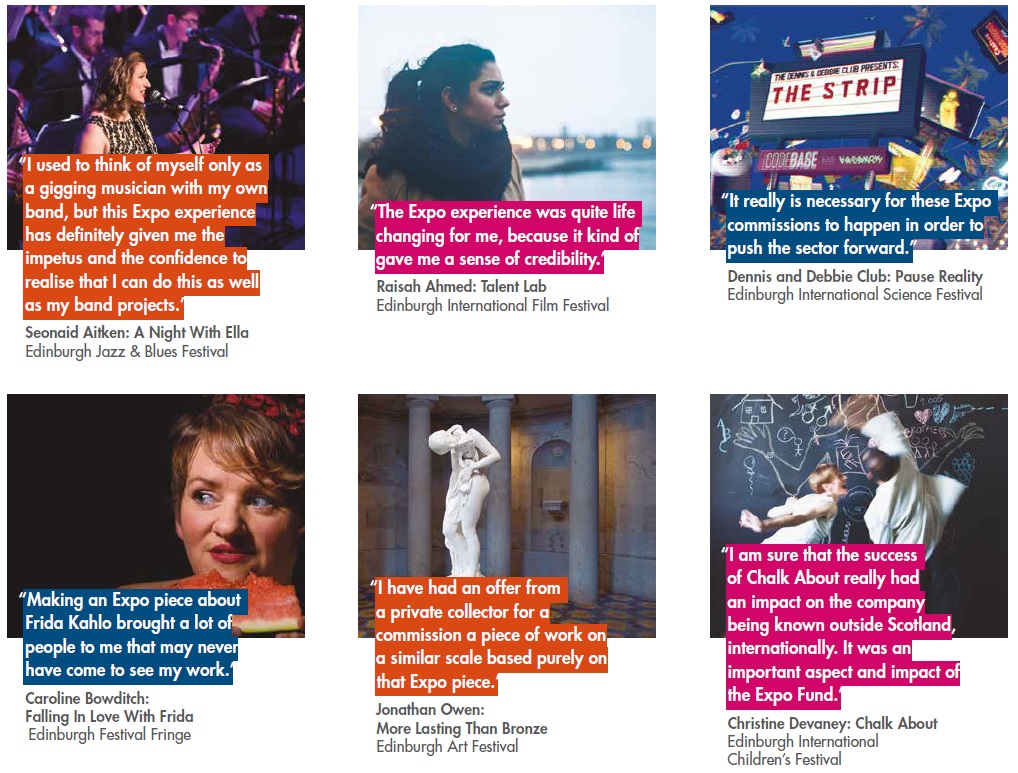 Further details of the impact of the Expo Fund, together with recommendatiosn for its future development can be found in Ten Years of Expo [published July 2018].