Challenge: How to develop strategic opportunities around the unique international connections of the Edinburgh Festivals

Solution: The development of a pioneering cultural diplomacy programme

Fostering good International relations has been at the heart of the Edinburgh Festivals ever since the Edinburgh International Festival was founded in 1947 to create ‘a plaform for the flowering of the human spirit’ in the aftermath of World War Two. But it was only in recent years that this type of work began to be recognised having value beyond the cultural world and began to be termed ‘soft power’.

‘Soft power’ is a concept developed by Joseph Nye of Harvard University and defines the ability to shape the preferences of others through appeal and attraction rather than force or finance. A defining feature of soft power is that it is noncoercive; the currency of soft power is culture, political values, and foreign policies. In 2012, Nye explained that with soft power, "the best propaganda is not propaganda", further explaining that during the Information Age, "credibility is the scarcest resource."

In 2011 the Edinburgh Festivals, though the auspices of Festivals Edinburgh, ran a small scale pilot programme which invited 40 guests from 3 countries to visit Edinburgh during the peak August festivals period. The success of this initial programme led Festivals Edinburgh to work over the following 12 months with British Council Scotland, and Creative Scotland on a more ambitious programe that would sit within the wider framework of the partners’ cultural diplomacy work. Ths resulted in the hosting of 150 delegates from 23 countries, with a strategic focus on India, South Africa and Brazil.

In 2013 this work led to the creation of a Cultural Diplomacy Partnership, a group that meets regularly bringing together representatives from Creative Scotland, British Council Scotland, Scottish Government and City of Edinburgh Council. The August delegates programme was named Momentum and its specific objectives were further refined as being to: 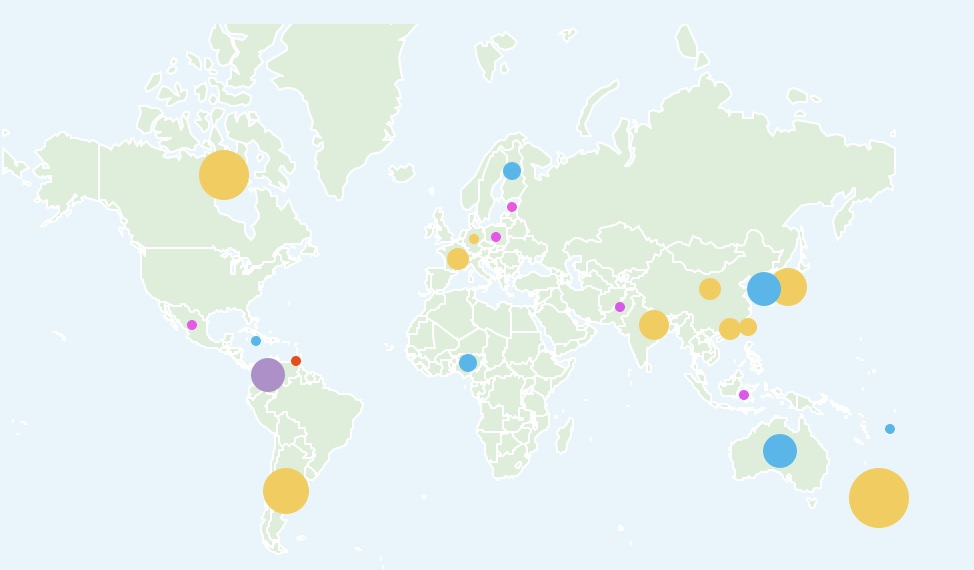 Improvements durng 2014 and 2015 saw greater clarity given to the categorization of delegates – with Full Delegates [from ‘seed’, matruring or alumni countries]; Referred delegates; Seminar Guests; and VIPs. Invitations were based on the identffication by Momentum’s partners of countries they either wanted to create links with or had existing links they wished to build on. In close consultation, the partners mutually agreed on a list of target countries, and identified which of those countries had mutual interest in these relationships, and the necessary domestic infrastructure to support and make the relationship work.

By 2016, based in its hub in the Edinburgh Festivals Delegate Centre at Creative Scotland in Waverley Gate, Momentum had become an exclusive invitation and individually tailored delegate programme to the world’s leading festival city.

The British Council and Creative Scotland commissioned a long-term study into Momentum from Astrid Flowers during 2015). The report was, on the whole, incredibly positive and demonstrated that Momentum is highly regarded by stakeholders, international delegates and the wider Scottish cultural sector, with 84% of those responding to the evaluation stating that their objectives of attending had been completely met by the programme. It was noted that the word had spread and demand for the programme had increased significantly, with some countries developing selection processes to manage the volume of applicants.

Specific results from the 2016 programme were: 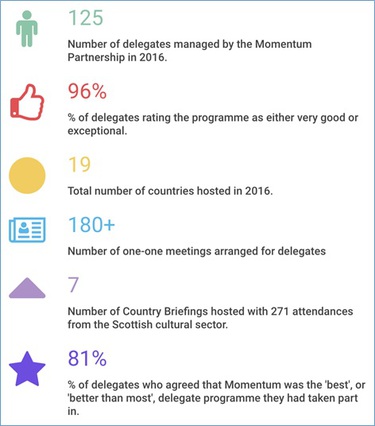 According to the evaluation report – ‘An important, hard to measure, outcome is the contribution that Momentum makes to building mutual understanding across nations.’ Howeever early indications indicate that Momentum contributes to a positive world view of Scotland as a nation committed to supporting cultural diplomacy throughout the world and thus helps deliver the Scottish Government’s National Performance Indicator ‘Improve people’s perceptions, attitudes and awareness of Scotland’s reputation’ (in support of its National Outcome aspiration ‘We take pride in a strong, fair and inclusive national identity’).

If you want to find out more: check out our Momentum Case Studies wherre you'll hear how a Scottish play grew new wings to transform perceptions about the transgender community in Brazil, discover how four of Scotland’s most promising contemporary artists had their work showcased at a key arts festival in India and learn of a flourishing partnership between two Scottish performing arts organisations and their counterparts in Japan.

Momentum is delivered by Festivals Edinburgh (on behalf of Edinburgh’s Festivals), British Council Scotland, and Creative Scotland, with additional support from City of Edinburgh Council, Event Scotland and Scottish Government, as part of their commitment to a year round integrated Cultural Diplomacy working model.