At the Top of Their Game: Tattoo, Book and Fringe Festivals Wrap-up

The Tattoo, Fringe and Book Festival have all now ended for another year - so here's a look at what they achieved in 2014! 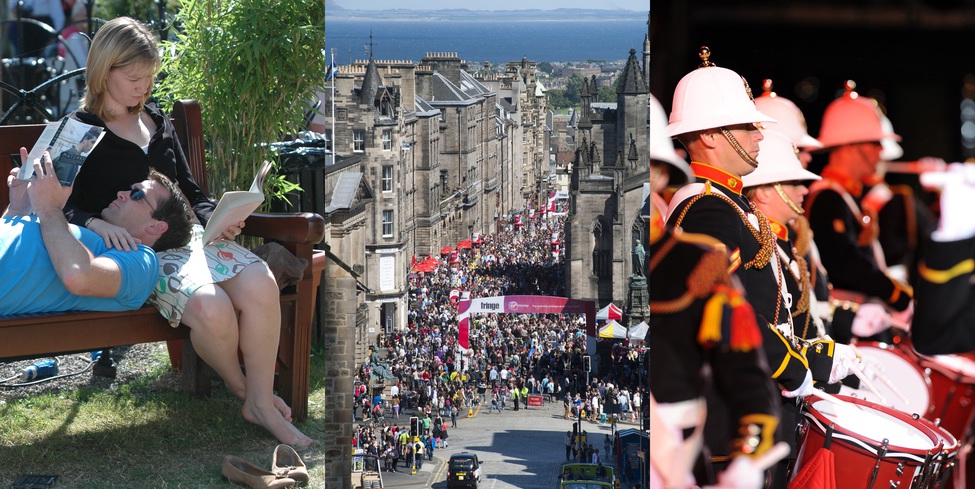 The Book Festival ended its 17 days of dialogue, discussion and debate on a high, with over 225,000 visits to Charlotte Square Gardens this year and ticket and book sales matching last year's record-breaking figures.

The University of Edinburgh's coveted James Tait Black Prizes were awarded at a special ceremony to novelist Jim Crace and biographer Hermione Lee. New writers were also honoured, with 47 authors bringing their debut novels and short story collections to the festival - all of which are eligible for the festival's First Book Award; voting is open to readers and audience members until Friday 17 October.

This has been a breathtakingly vibrant year for the Book Festival. The atmosphere among audiences has ranged from exuberant to deeply thoughtful, with a real sense that Scotland is on the cusp of an epoch-defining decision. True to the spirit of dialogue that ran through this year’s programme, authors and audiences alike engaged in conversations that were intelligent and often incredibly perceptive. Public democracy is alive and kicking in Charlotte Square Gardens.

Up on the Castle Esplanade, Royal Edinburgh Military Tattoo's incredible display sold out for the 16th year in a row, with 215,800 tickets issued.

Over 1,000 performers from Australia, New Zealand, South Africa, Canada, Singapore, India, Malta and the United Kingdom featured in this summer’s Tattoo, which celebrated a Homecoming-themed 'Our Home, Friends and Family' concept and showcased one of the largest Massed Pipes and Drums ever assembled on the Castle Esplanade.

For the next four weeks, UK residents can see a recording of the performance on BBC iPlayer, and audiences around the world can look forward to future international broadcasts on local television channels.

The Tattoo have also released a 3 and a half minute timelapse showing the entire performance at lightning speed!

The Fringe truly surpassed itself this year - no mean feat for an arts festival that is already the biggest in the world - issuing over 2 million tickets, a 12% increase on last year.

3,193 shows were staged in 299 venues across Edinburgh over 25 days, with the total number of performances sitting at an incredible 49,497. Awards continued to be a crucial part of the Fringe experience for participants, with shows from across the world and from all genres celebrated with a host of coveted awards and prizes. Here's a full list of this year's winners.

A number of new venues saw 2014 expand into new areas of the city; for the first time ever the Famous Spiegeltent was located in St Andrew Square, alongside Stand in the Square, creating a new garden of Fringe-themed delights in the New Town, and Northern Stage moved to a new premise at the King's Hall on South Clerk Street. A number of new pop up venues also hosted innovative site-specific work, including Sandy's Boxing Gym, Summerhall@Portobello Beach, a bedroom in a secret location, and even a rickshaw.

This year also saw ticketing services expanded and modernised, including new features that allowed people to share booked and favourite shows with friends and family, search for information on venue accessibility, and leave audience reviews.

Once again audiences from Edinburgh, Scotland, the UK and across the globe have been exposed to a completely fantastic cultural experience. Over the last 25 days performers, writers and artists have given their all on stages across Edinburgh in a truly international celebration of culture and entertainment.

On behalf of everyone who visited and enjoyed this year’s Fringe, I would like to thank all of the immensely talented and courageous participants who brought their work to the Scottish Capital during August – without them this festival would simply not be possible.