A Tattoo for the generations

Not content with enjoying yet another amazing run, the Royal Edinburgh Military Tattoo has been showing how people across all ages are at the heart of the summer spectacular. 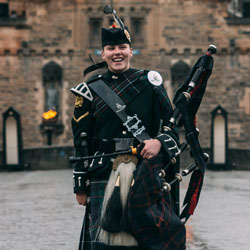 Breaking new ground during the show's greatly loved Lone Piper moment was 21-year-old Lance Bombardier, Megan Beveridge, the youngest British Army soldier to qualify as Pipe Major, and the first woman ever to do so.

L/Bdr Beveridge also became the first serving female soldier to take on the Lone Piper role, when she played on the Edinburgh Castle ramparts on Saturday 13 August. This year's Tattoo lament is Sleep Dearie Sleep, and L/Bdr Beveridge performed the piece expertly for the crowd of almost 9000 people.

Lance Bombardier Beveridge truly deserved this extraordinary opportunity to play on the battlements of Edinburgh Castle.  She has worked so hard over many years to master the instrument, to meet her own high standards and to impress those that judge proficiency in the Great Highland Bagpipe.

To my knowledge, only one other woman has ever performed as the Lone Piper on our Tattoo and that was Officer Cadet Elaine Marnoch in 1977.  So, last night is a fabulous milestone in so many ways.  Congratulations!

A few days later, and an even younger Tattoo participant was meeting up with some of the event's most senior and respected participants. 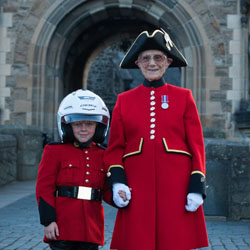 Five-year-old Jessie N’Jie, a member of the Imps Motorcycle Display Team, got a chance to say hello to a group of Chelsea Pensioners, as the well-known former servicemen and servicewomen made a very special visit to Edinburgh for the Tattoo.

Young Jesse, whose team's on-board exploits have been thrilling the crowds at this year's show, posed for photos with the group and with 90-year-old Helen Andrews.

Helen and Jesse were the youngest and oldest participants to appear on the Castle Esplanade on the evening of Tuesday 16 August, with Helen and her fellow Pensioners there to march on, during the Finalé of that evening's performance.

The Royal Edinburgh Military Tattoo runs until 27 August 2016. Find out more, including links for programme information and booking tickets, on our Tattoo page.