There are 41 venues at this year's Edinburgh Art Festival - some big, some small, some well-known and some rather unusual - here we take a look at a selection of them, and some of the fantastic work you can expect to see when you visit.

Founded by art collectors Robert and Nicky Wilson as a place where contemporary artists could display their work in a natural environment, Jupiter Artland is 80 acres of gardens, fields and woodlands in Wilkieston, 25-30 minutes south west of Edinburgh. Throughout the grounds and in Bonnington House Steadings are beautiful pieces of site-specific art, some on a huge scale, including Charles Jencks' amazing Cells of Life land sculpture.

Spread across two beautiful galleries, each in its own stunning grounds, the Scottish National Gallery of Modern Art lies just west of Edinburgh city centre and hold outstanding collections of art from the beginning of the 20th century until the present day. Modern One is home to another fantastic Charles Jencks-designed land sculpture as well as work by the likes of Picasso, Matisse, Bacon, Hockney, Warhol, Hirst and Emin. Modern Two holds an amazing recreation of Eduardo Paolozzi’s studio as well as The Stairwell Project, a large-scale permanent piece from Richard Wright.

This small studio and gallery is artist-run, and provides space for up to 10 artists to work as well as exhibition space in the east end of the city, not far from Holyrood Park. The organisation has a focus on recent graduates and early-career artists and as well as Edinburgh Art Festival has also been a venue for the Edinburgh International Science Festival.

What's on during Edinburgh Art Festival?
Goulash, a showcase of new work from the venue's studio residents 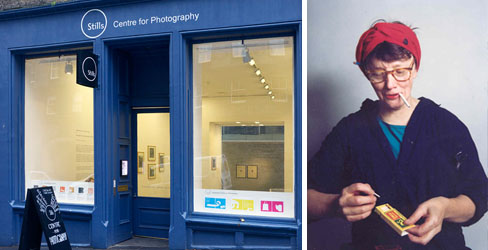 Located in Edinburgh city centre, Stills is a centre for photography offering exhibition and production facilities for anyone wishing to discover, enjoy and understand photography. Still was established in 1977 and is currently working on a large history project to document its past.

What's on during Edinburgh Art Festival?
The photography of Jo Spence

Lying centrally between Edinburgh's Old and New Towns, as well as almost exactly halfway along Princes Street, the National Gallery of Scotland can truly be said to be at the heart of Edinburgh's artistic life. The stunning building at the foot of the Mound houses a world-class collection of fine art and regularly hosts major special exhibitions.

One of the most versatile venues in Edinburgh, the National Museum of Scotland has hosted events and exhibitions for many of the city's other major festivals, including the Edinburgh International Science Festival, the Imaginate Festival, Edinburgh International Film Festival, Edinburgh Festival Fringe and Edinburgh's Hogmanay. And beyond festival involvements, of course, it's one the best loved visitor attractions in Scotland, and recently re-opened 10 refurbished galleries.

What's on during Edinburgh Art Festival?
Celts, a major exhibition in partnership with the British Museum

As the name might suggest, Pack and Send is in fact the business premises of an international postal, freight and courier company. So why are they mentioned here in an article about Edinburgh Art Festival? Well, their Edinburgh East office partway down Leith Walk also has a basement which for some time has been used as a hidden studio and gallery for local artists, and is a venue for the festival this August.

What's on during Edinburgh Art Festival?
P + P, a group exhibition of ten cubic cardboard boxes, sent to ten artists to use as the basis for their unique artworks.

The Prince of Wales Dock

Further down the hill, in Leith itself, lies the city's port area, for centuries a bustling hub for trade and travel, and still operational today. The area has seen a lot of redevelopment in recent decades and is regarded as one of the coolest areas of the city. A perfect location then for Ciara Phillips' incredible Dazzle Ship, a piece of work entitled Every Woman, which was commissioned for Edinburgh Art Festival.

Of course these are just a handful of the amazing and diverse venues at the festival, giving audiences a great opportunity to explore the city via art.

Edinburgh Art Festival runs from 28 July – 28 August 2016. Find out more, including links for detailed programme and ticketing information on our Festival page.