Supergirl and the Science Adventure!

With Edinburgh International Science Festival at roughly the halfway point, we decided to send Michael, our Digital Marketing Officer, off to the festival with his 4 and a half year old daughter to see some of the family fun on offer.

"Do you know what science is, Alice?"

(It's about now that I realise I should have had an answer in mind before raising this fairly tricky question in front of a small child.)

With this scintillating discussion into the nature of the subject itself, began what Alice had already decided was to be called 'Science Day'.

Quick flashback to February: When the time came to plan what sort of stories we would want for this website in the lead up to the Festival and during its run, a daddy-daughter day was in there from the start. I'm a bit of a science and tech fan, and I've always encouraged Alice to take an interest too, so the Science Festival was a perfect opportunity for us both.

Phase I - Superheroes and Strange Somethings

And so it was that we found ourselves at Summerhall one morning, about to begin our trip through Science Day. Alice was kitted up in her Supergirl gear, her extremely kind and helpful Auntie Margaret was on hand to help out, and we were starting our day with The Science of Superheroes! 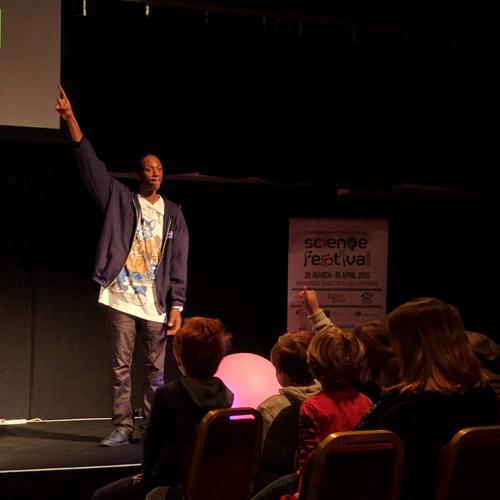 Mark Brake and Jon Chase (pictured) led a thoroughly interesting show, looking at some of popular culture's most famous masked avengers and caped crusaders, helped by a rapt and enthusiastic young audience.

The pair periodically threw out questions to the group about, for example how realistic it might be to be able to run like The Flash, or to suddenly grow huge muscles like The Incredible Hulk - "somehow, his trousers always manage not to rip and fall off!" joked Mark, "Must be made of Lycra."

Prompting one forest of hands after another, Jon and Mark captured the imaginations of the wannabe-heroes in the crowd, while also delivering some real-life science points to get the kids thinking. And when Alice, who can sometimes be a little timid, raised her hand to correctly identify Wonder Woman's logo from six on the screen, I knew this was a hit. 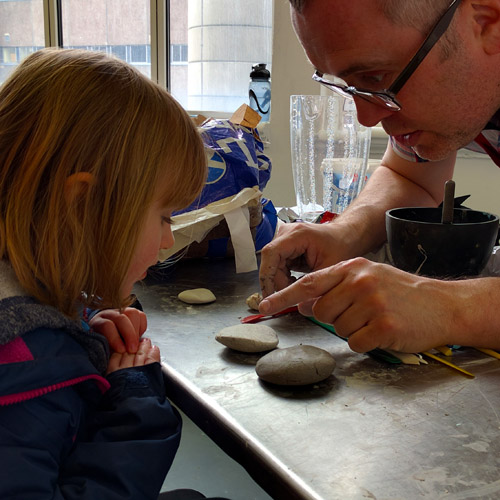 But now it was time to move on and upstairs to where a couple of fun workshops were taking place - we had come for Bedtime Balancing Act, but with that table full of children each constructing a colourful... something or other... we quickly visited its neighbouring table.

There, Trevor Gordon took us through Dermatological Distractors, an intriguing project using science and art to help adults and children with eczema. By creating small finger casts, carving patterns into clay and exploring textures, the aim is to create pocket-sized 'distractors' to help with resisting the urge to itch. Cool stuff. 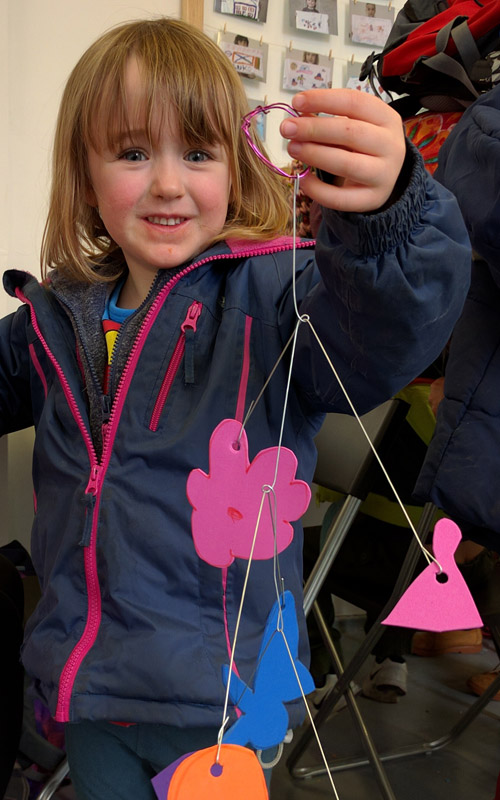 Space had now opened up back on the other table so we said our goodbyes and crossed the room to find out what those mysterious 'somethings' were - and it turned out that the 'balancing' in the workshop title referred to creating hanging mobiles from foam and wire.

Alice immediately took to the idea of drawing simple shapes on the foam, and with Margaret passing across the finished pieces and me on scissors duty, we soon had the six cutouts that host Josie Vallely had asked for.

Josie then attached a pair of shapes each to three pieces of wire, showed Alice how to find the balancing point of each, and with some careful bending and looping of more wire, we suddenly had a unique, multicolour and rather excellent mobile for Alice to hang in her room.

"When can we go back there again?" she asked as we wandered away up the road from Summerhall. A good start to the day. 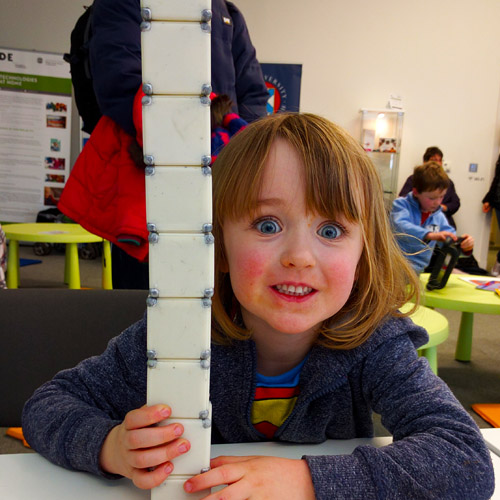 After a quick lunch we headed to our next destination, and probably Alice's favourite place in the whole world, the National Museum of Scotland. As a regular visitor to the museum, she was all over this, impatiently leading Auntie Margaret by the hand, desperate to get inside.

We weren't going to her usual favourites today though - instead we were off to the museum's fantastic Learning Centre, where we had some drop-in activity rooms to visit.

First we checked out Children and Technology, where the University of Edinburgh's team were on hand to give demonstrations of tech specially designed for children. 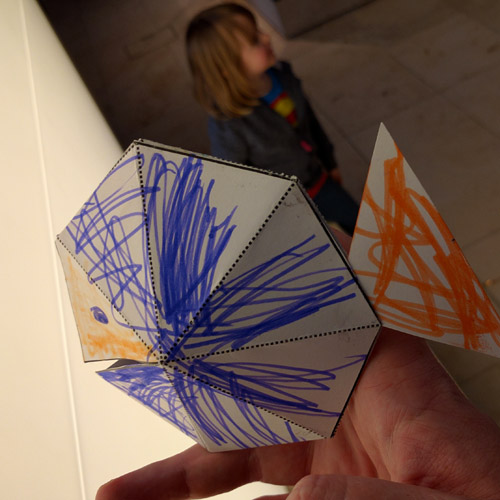 Among the many activities on offer, we used a fun phone app to play a very silly sheep-shearing, cow-milking game, constructed spaceships and animals out of magnetised blocks, and watched another child move giant blocks around a screen just by waving her hands and clenching her fists. Video games weren't like this back in my day, etc, etc...

Then it was Pop-Up Engineering, also run by UoE, where Alice learned how to create a rather smart 3D fish out of some folded cardboard, a bit of glue and an elastic band. We needed a little bit of help from the helper at the stand, and we got slightly sticky with the glue, but in the end Sally the Fish (don't ask...) was ready, and Alice was happy.

We may have gotten sticky with the glue at the museum, but our next and final stop was the City Art Centre where we would reach a new level. We were here for Splat-tastic which promised just what it sounded like, mixing chemicals to make the stickiest, splodgiest slime possible.

Before donning our goggles and gloves though, we took in the Chain Reactor, an amazing 10 metre long, Heath-Robinson-esque contraption which started with a puff of smoke and ended with a dramatic crash.

Bright liquids flowed down spiral tubes, billiard balls defied gravity, chemicals fizzed and bubbled and a potato generated electricity, as the magnificent machine converted and transferred energy from one end to the other, each section setting off the next, rather like an especially scientific game of Mousetrap.

Alice seemed a little bewildered by the pace of it all, but when the final billiard ball dropped through a hole and down onto the climactic cymbal to bring the reaction to a close, she looked like she'd enjoyed it. 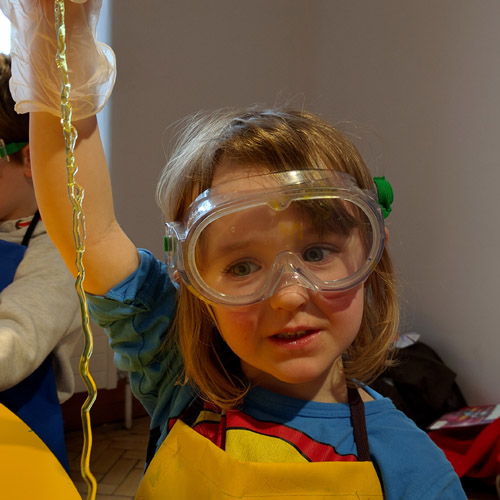 Time for the safety gear now though, including a very fetching yellow apron, as we learned how to measure and mix chemicals to turn simple-looking liquids into amazing wobbly creations.

Nothing seemed to happen until Sam, who was leading the session, got us to reach into the beaker with our tweezers and grab onto what turned out to be a very long and very wiggly worm of transparent jelly-like stuff. Alice was amazed and delighted by this, happily waving her worm around and poking at it.

And then it was on to the main event, and the creation of... [cue the dramatic music]... The Slime! 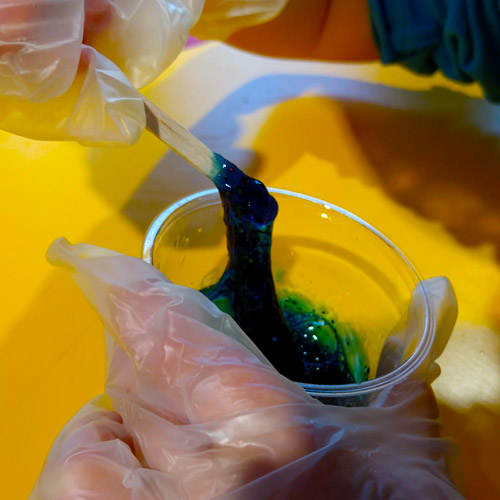 Combining more chemicals (the names of which I really should have noted at the time), and adding some food colouring, Sam showed us how to make either a dry and bouncy slime or a wet and sticky one, with the table evenly split between the two options.

Alice and I joined Team Sticky, again using measuring tools to ensure just the right combination of compounds. Some careful mixing, plus the addition of glitter to make it extra sparkly, and our slime was ready to join everyone else's for the final test - the Splat-o-Meter.

An eager queue of kids lined up to chuck their creations against the big target and see what happened - some bounced, some splattered and some missed entirely! And when it came time for Alice to have a go, she threw with vigour, and watched as her gelatinous projectile rebounded from the board, wobbled its way back through the air and merrily bounced away along the ground. A superbly sticky success!

In the end, Alice, Margaret and I could have spent hours more, enjoying all that the Festival had to offer. We didn't make it to the Little Giants show teaching children about the wonderful world of bees, nor to either the Tiny Homes exhibition on the Mound or the Mars Master Constructors activity where Lego bricks aplenty awaited would-be colonisers of the Red Planet.

We had a blast with the things we did go to though and, as a slightly sleepy but thoroughly contented little girl murmured as we headed away, "I had a good time today, Daddy". Job done.

Edinburgh International Science Festival runs until Sunday 10 April 2016. Find out more about the Festival, including programme and ticket booking details on our festival page.

Thanks to Edinburgh International Science Festival and their teams of demonstrators and staff, my colleagues at Edinburgh's Festivals, Margaret McGowan and of course Alice, for all their help with this piece.