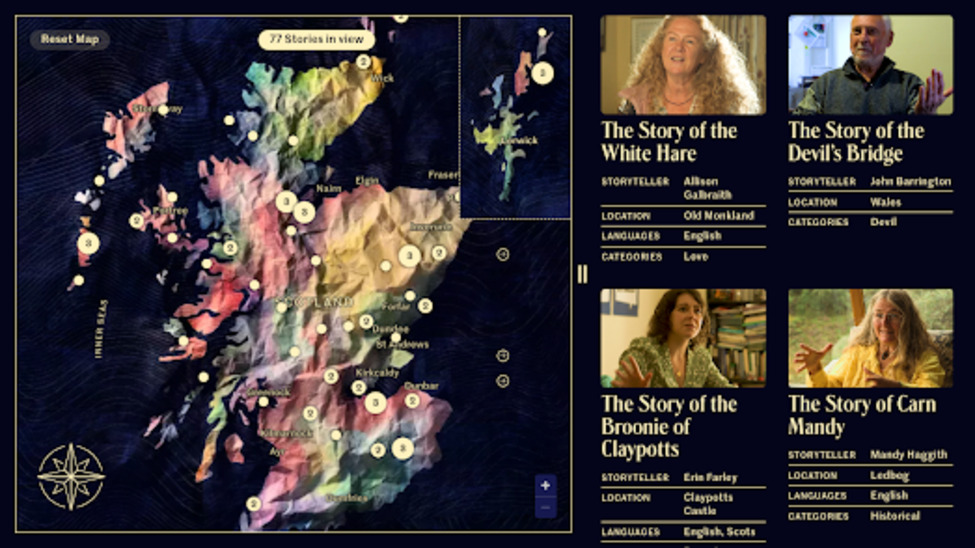 Oral storytelling is one of Scotland’s most deeply-rooted, and yet underappreciated art forms, the focus of our Scottish International Storytelling Fetsival - and Map of Stories is an attempt to express some small part of the dizzying diversity within Scottish oral storytelling traditions.

An initial collection of 77 stories has been placed on an interactive map, with the stories taking multiple shapes and forms, with the map allowing anyone to explore tales from throughout Scotland and filter the stories by language (English, Gaelic or Scots) and by category.

Some stories arise from Scotland’s indigenous languages—from Gaelic or Scots—and from particular communities, whether those be Scottish traveller communities, or those amongst the many islands of Shetland. Others, equally rich and provocative, come from the growing number of migrant and mixed-heritage traditions—from Iran, India, Kenya, Ireland, Wales—that comprise Scotland as a complex 21st Century nation.

Some are ancient folk tales that have been handed down from own teller to another (and, indeed, if you look closely enough you’ll find the same story popping up here and there in different guises).

Others are more contemporary: stories of personal experience, of local history, or stories the tellers have brought together and shaped themselves.

Whilst kaleidoscopic in its scope, what is shared with you here is—as you will likely be aware—only the very tip of the iceberg. As much as we could happily have worked on this project forever, we would never – either then or now – have been able to capture a full picture of the vast reach and depth of Scotland’s community storytelling traditions.

What we have here is—recalling the parable of the blind men and the elephant—merely a foot, or a trunk; a small, curated part, rather than a whole.

And yet, like all maps, we hope our Map of Stories now serves as an invitation to go exploring. It is, in very real terms, a treasure map. We have found some of the treasure, and marked it here on the map for you to follow in our footsteps.

But there is so much more to be found.

So: for those seeking to set out on an adventure of their own, we hope the Map of Stories leads you somewhere new, beyond yourselves—towards a proximity and uncanny kinship with experiences other than your own —and into new experiences of place, landscape and story…

Explore the Map of Stories at https://mapofstories.scot/