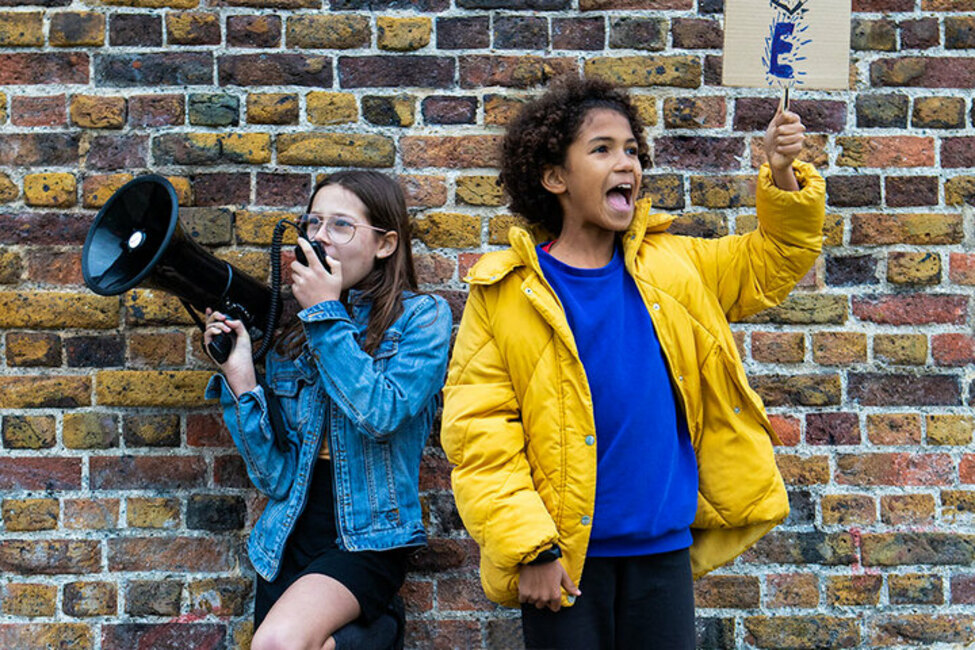 Protest is a bold new play from award winning writer Hannah Lavery (Lament for Sheku Bayoh, The Drift, Eavesdropping), exploring what it takes to make a difference, the power of friendship, and the importance of believing in your own voice.

Producers Imaginate, Fuel, Northern Stage and the National Theatre of Scotland have joined forces for this timely and important new production celebrating youth activism, which will be directed by Northern Stage’s Artistic Director and Joint Chief Executive Natalie Ibu (Road, The White Card). The play will tour to Northern Stage in Newcastle and across Scotland before opening the Edinburgh International Children’s Festival in May 2023.

Hannah Lavery talks about the writing of the play and how she was supported in doing so by Imaginate's Accelerator programme.

Protest follows three girls prepared to make a stand. Running is Alice’s happy place. She’s the best runner at her school but is struggling to prove her worth. Jade is slowly coming to realise that prejudices can be found everywhere, even in the most surprising places. Realising that her education is ill-equipped to encompass her own history and heritage, and taunted by bullies at school, she knows it’s time to tell her own story. Meanwhile, litter is piling up in the local forest, and all over the world an environmental crisis is looming. Chloe is determined to make a change, starting with the town. The three girls prepare to stand up for what they believe in, despite the injustices stacked against them.

Writer Hannah Lavery said: "It felt important to write a play for young people which offered hope. We are living in such tumultuous times that can leave us all and especially young people with a sense that we have no agency to inspire and create change. So, I wanted to celebrate those young people who within their local communities, within their schools, families and friendship groups are working to make their world a better and fairer place for us all.”

Natalie Ibu, Artistic Director and Joint Chief Executive, Northern Stage and also the Director of Protest, said: "I’m thrilled to be directing Protest and proud that Northern Stage are co-producers on this fantastic new play. We hope it inspires more young people to find their voice. A celebration of youth activism and uniting to take a stand against racism, the patriarchy and the climate crisis, Hannah Lavery's brilliant new play couldn't be more fitting for our This is Family season - a year long programme exploring how we connect and organise ourselves; for support, for good times, for better or worse."

Noel Jordan, Director, Edinburgh International Children’s Festival, said: “Imaginate is thrilled to have supported Hannah as an Accelerator programme artist, providing her time and space for the first draft of the ‘Protest’ script to emerge. The commission as a full Festival production, alongside incredible partners, feels timely with its focus on gender and racial inequality and the importance of young female voices.”

Kate McGrath, Director, Fuel, said: “Hannah Lavery has written a beautiful play, a celebration of the power of young girls to stand up for what they believe in, like generations of girls before them and yet to come. This project is part of a longstanding commitment to producing the work of brilliant womxn theatre-makers on projects exploring the big questions of our times.”

Jackie Wylie, Artistic Director of National Theatre of Scotland, said: “National Theatre of Scotland fully supports all young people in having a say in the future of our world.  Hannah’s beautifully crafted play, exploring this territory, is fuelled with hope and passion. We are so proud to be supporting the touring of this production, working with valued partners, Fuel, Imaginate and Northern Stage to ensure that audiences across Scotland will have the chance to experience this vital and timely production about the power of protest.”