First of the Fringe First Awards 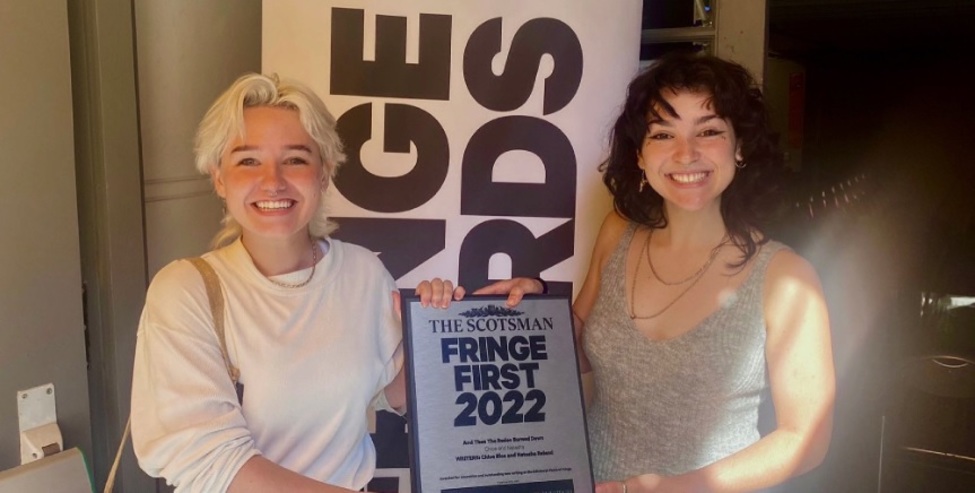 Following the cancelaltion of the 2020 Fringe Festival, and the restricted festival in 2021, the Scotsman’s Fringe First awards, in partnership with the University of Edinburgh, have returned - the most prestigious tehatre awards at the Festival.

Designed to encourage performers to bring new work to Edinburgh in the spirit of adventure and experiment, the Fringe First Awards - awarded weekly throughout the Fringe - have been celebrating the best new writing premiered on the Fringe since 1973, as judged by the team of critics from Scotland’s national newspaper, the Scotsman - this year chaired by the Scotsman’s chief theatre critic, Joyce McMillan, and consisting of critics Mark Fisher, Susan Mansfield, Sally Stott, Fiona Shepherd and David Pollock.

And the winners are:

What the Scotsman said: “Laura Horton’s sensitive and sharply observed script, based on her own experiences of hoarding clothes, is beautifully performed by Madeleine MacMahon, who embodies her character like a tailormade dress. The illusion of ‘normality’ that Sophie, sizzling with self-doubt, is desperately trying to maintain is coming apart at the seams – the irony being that she only feels ‘in control’ when she’s out of control. Choosing to see the savings that come from buying designer second hand clothes, rather than the cost, she’s a complicated, compulsive creation that it’s a thrill and a horror to shop with. ‘Haven’t we all got a bit too much?’ she at one point asks. Of course, for many of us the answer is yes.”

And Then The Rodeo Burned Down: TheSpace @Niddry Street, 4pm, until 13 August

What the Scotsman said: “By turns a vaudevillian thriller and a queer cowboy Waiting for Godot, And Then The Rodeo Burns Down sends up clichés of macho posturing, pulls off an emotional encounter with a lost bull suffering an identity crisis, and then squares up to the act of storytelling itself. It’s expensive to keep the show on the road these days, any clown knows that. Can these rag-tag stragglers afford a happy ending? Or any ending at all? Sound tracked, like every respectable Western, by Dolly Parton, Johnny Cash and Miley Cyrus, Rice and Roland’s double-act is pure Fringe spirit: joyful, rebellious, and dashingly rough around the edges. Some cowboys just want to kiss while the world burns.” (Katie Hawthorne)

The Beatles Were a Boyband: Gilded Balloon Patter Hoose, 8pm, until 13 August

What the Scotsman said: “Everyday sexism is integrated into everyday everything else in Rachel O’Regan’s defiantly down-to-earth new play that refuses to let its lively young Scottish female pals be defined by the actions of anonymous men whose misogyny increasingly risks encroaching on the cosy comfort of their shared longue. Rejecting the loftier tone of the ‘issue-based play’ that it decisively isn’t, the piece instead celebrates the friendship of the three women as they try and fail, often amusingly, to navigate the behaviour of #notallmen without giving up their right to go out, have fun and come home again, as well as listen to murder podcasts and joke about sugar daddies.” (Sally Stott)

What the Scotsman said: “Happy Meal tells the story of Bette and Alex, two transgender teenagers who find one another on the internet, become close friends, but then experience whole worlds of estrangement, as relatively middle-class Alex makes a transition to student life as Alec, while Bette struggles to come out as trans to anyone except her online best friend. Played out on a witty set by Ben Stones that fully captures the intensity of the online life of 21st century teenagers, Happy Meal features two gorgeous performance from Allie Daniel and Sam Crerar; in a simple one-hour tale of young love made complicated by society’s attitudes to shifting gender, but now free enough to find a true happy ending, to the cheers of the Traverse audience.” (Joyce McMillan)

What the Scotsman said: “An absurdist piece rich in comedy, clowning and dance which takes aim at old misogynist attitudes has snapped right up to date, with Adrienne Truscott questioning (co-star) Feidlim Cannon’s attitude to and very place in their show. Every older white male’s continued place in theatre, in fact. What follows is challenging and disturbing, but still very darkly funny, especially as an attack on performative male allyship in enthusiastic word only. It’s magnificent, unmissable (certainly if you work in the arts) and likely thoroughly divisive – the Fringe at its best.” (David Pollock)

What the Scotsman said: “Sonya Kelly’s gorgeously stylish new 90-minute play for Druid Theatre is set in the queue for returned tickets at a posh European opera house and is in some ways fairly predictable thin-veneer-of-civilisation stuff, speculating on how easily even the quest for solace (or status) through art can escalate towards aggression and violence. In Sarah Joyce’s elegant and powerful production, though, it’s all so beautifully delivered, by a terrific seven-strong cast led by Fiona Bell as an aggressive ticket-seeker, and Anna Healy as a magnificent ticket lady, that the whole farce and tragedy becomes irresistible; and if the play’s final scene seems like something from a dream - well, it’s clear that realism is running out of options, when it comes to describing the way we live now.” (Joyce McMillan)