What makes the Edinburgh Jazz & Blues Festival so special? 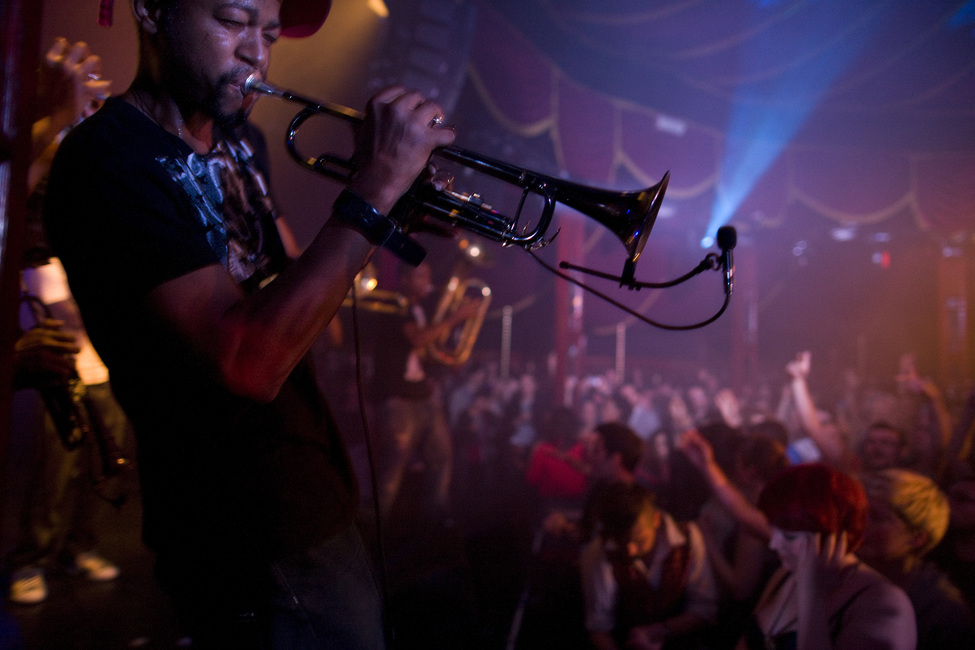 From Friday 15 to Sunday 24 July, Edinburgh Jazz & Blues Festival will be back live in the city. From New Orleans jazz of the 1920s to the freshest hippest sounds from at home and abroad, the 10-day programme can be guaranteed to excite all music lovers. So, here’s 10 reasons why it's so special and why you should join us during those 10 days.

First up, there's the Musical Range

Originally, the festival featured traditional jazz performances played in Edinburgh’s pubs, and it slowly evolved to feature a more diverse range of styles.  For fans of Jazz music though there are a lot of options - Contemporary jazz, Trad jazz, Swing jazz, Vintage jazz, New Orleans jazz... and all that jazz! The Festival also boasts a particularly strong Blues showing, with Blues rock, Memphis blues, Mississippi blues, San Francisco blues, Chicago, acoustic and electric blues, and much more of that deep soulful sound. And recent years have seen a further expansion of the programme to take in funk and hip hop, creating a real eclectic musical mix.

And the Amazing History

It’s been many years since the late Mike Hart organized the first festival in 1979 as a free traditional jazz event inspired by the Sacramento Dixieland Jazz Jubilee. From those early days, veterans of the great American bands were joined by younger local players who were part of the mainstream revival – all creating a unique musical melting pot, which developed further with the addition of the blues. Every year a host of amazing moments added to the festival’s mystique, such as the time former US President Jimmy Carter opened Dick Hyman’s concert with Topsy Chapman at St Giles Cathedral.

Where you're bound to see some Great Names 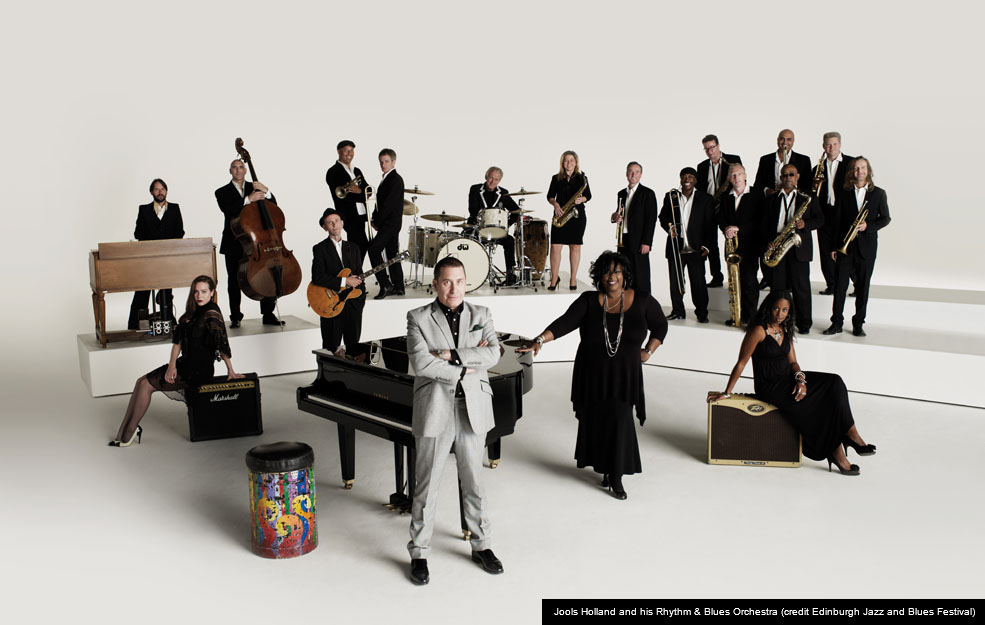 Stéphane Grappelli, BB King, Acker Bilk, Dionne Warwick, Humphrey Littleton, Georgie Fame and Elkie Brooks are just some of the names that have graced the festival stages over the years, all drawn by the festival’s amazing global reputation. This year John Scofield, Ambrose Akinmusire, Mud Morganfield and cover artist Nubya Garcia are just a few of the names you’ll find in the programme, all set to bring their unparalleled artistry to stages across our city. You’ll also be delighted to see some festival friends who’ve been sorely missed including Jools Holland [pictured], Blind Boy Paxton and festival favourite Davina and the Vagabonds.

Alongside the Emerging Stars of tomorrow 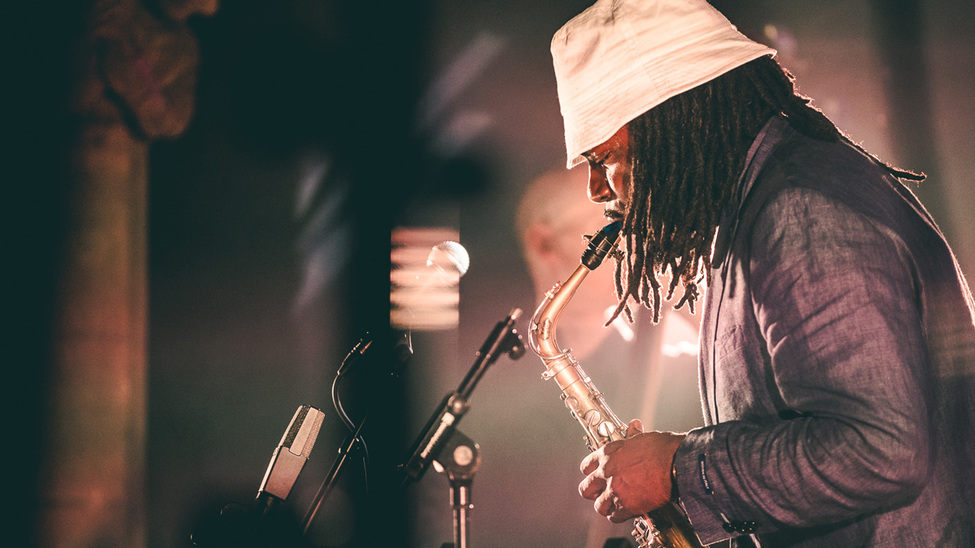 Across all styles, the Festival presents those musicians that they think are amongst the most exciting playing today. Creative inspiration can come at every point in a musician’s life, and the programme offers a platform that inspires musicians to create something special for audiences to enjoy. Award-winning saxophonist, composer, poet, MC, and producer Soweto Kinch [pictured] brings a new programming voice to this year’s festival with BLAZE, a strand showcasing up-and-coming talent from the wider UK including Xhosa Cole, Blue Lab Beats, Rosie Frater Taylor and Scotland’s own Anoushka Nanguy.

All surrounded by the best Local talent 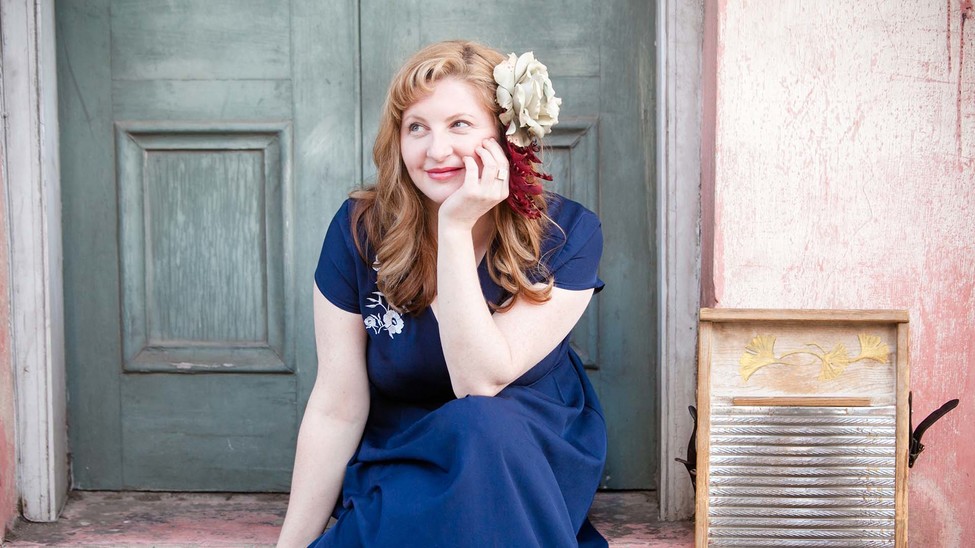 Scotland is home to some of Europe's most exciting and adventurous jazz musicians. Sure, jazz has always been a potent element of the country’s musical scene, but the past few years have seen a number of musicians, groups, and collectives forging something substantive and new. The Scottish Jazz Expo artists are the beating heart of the festival programme, and feature an array of new and exciting bands, projects and commissions including Fergus McCreadie, Ali Affleck [pictured], Colin Steele and Martin Kershaw. The EXPO series also gives voice to the new wave of Scottish Jazz including Richard Glassby, Conor Smith and Matthew Kilner.

And a cool International vibe 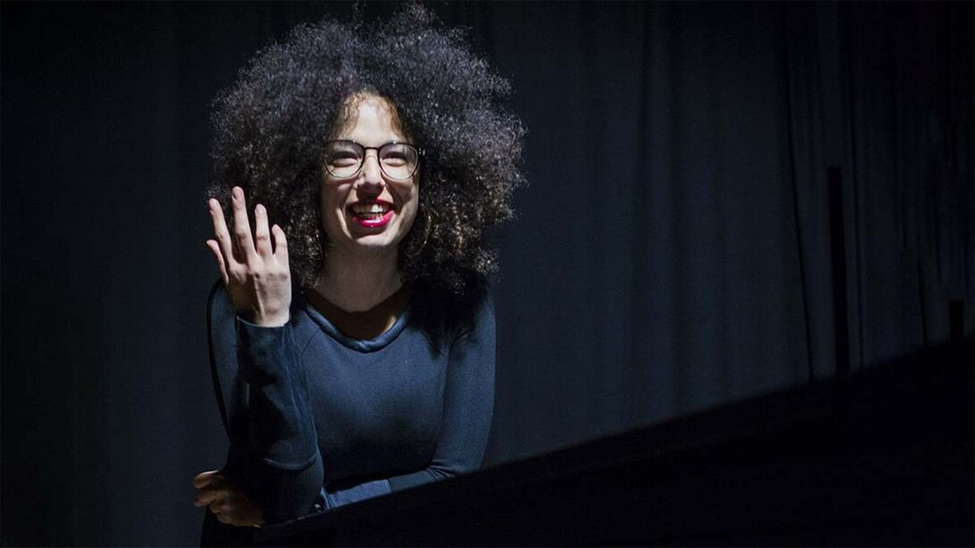 From the start the Festival’s vision has been international, the place to take the pulse of the international scene. 2022 will see a particular focus on Italy and the presentation of six new generation Italian artists reflecting the state of health of Italian jazz. The SPARK concert series have been programmed by I-jazz who say: “In recent years, more and more jazz bands are emerging in Italy. A thriving scene made up of young talents such as Federico Calcagno, Fabio Giachino, Sade Mangiaracina [pictured], Ferdinando Romano and Francesco Zampini which illustrate the creativity and mix of jazz in Italy showcasing great stylistic, geographical and genre variety”.

In some amazing venues 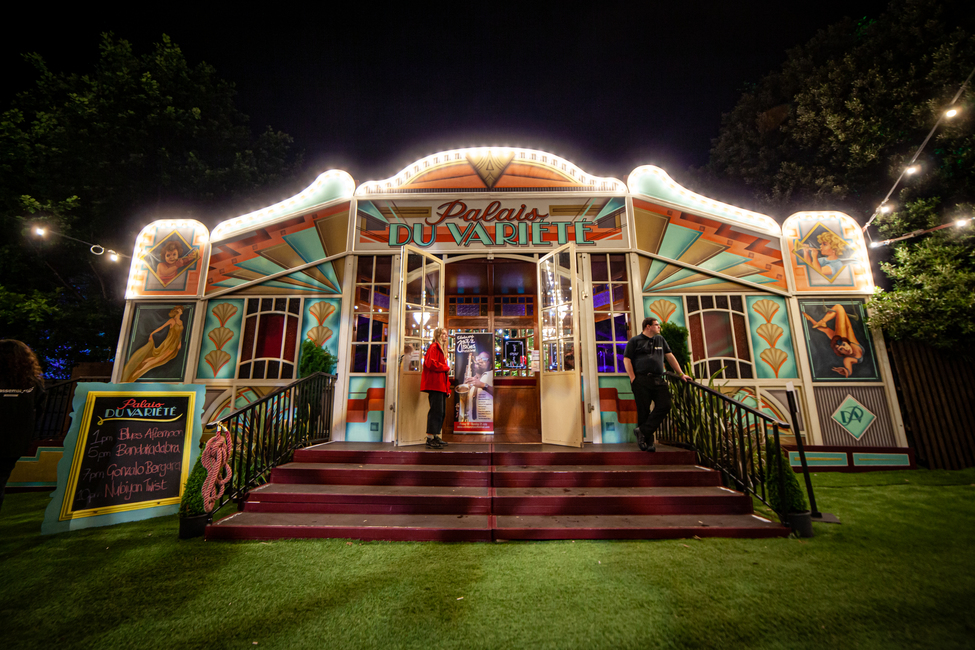 The Festival takes place in the very best venues throughout Edinburgh, from the greatest concert halls to hip nightclubs, from the grandeur of the city’s Festival Theatre to the intimacy of the Jazz Bar - with each venue chosen to complement to musicians performing. This year the Festival will take its show on the road to all 17 wards in the city, creating even more opportunities for people to dip their toe in their cool water. Everyone has their favourite and we must admit to a hidden love for the Spiegeltent in George Square, the ultimate cabaret and music salon with a central seating area circled by wooden booths, set in the attractive surrounds of George Square Gardens - and this year there's a special Late at Spiegel programme..

Plus the outdoor delights of the Mardi Gras 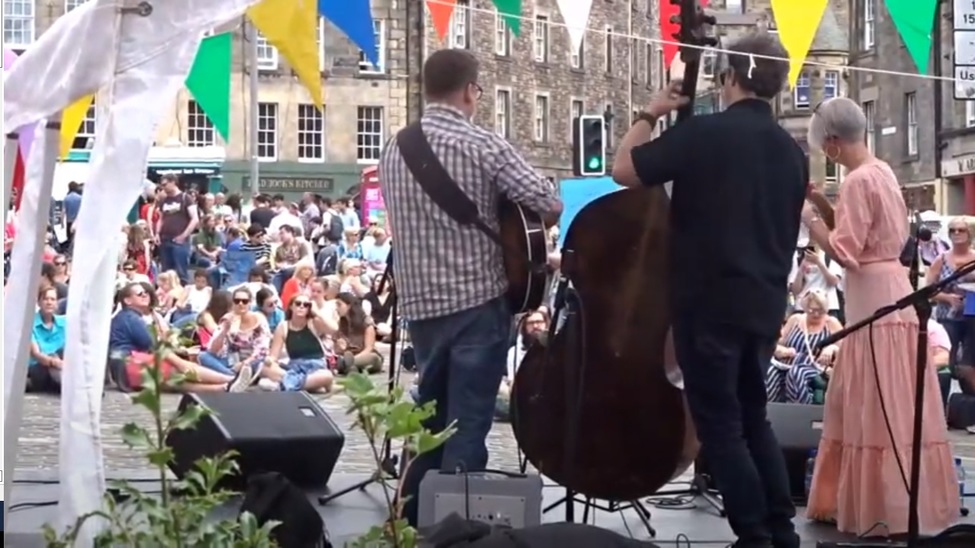 Nestled in the heart of Edinburgh's historic Old Town, the Grassmarket area is a historic marketplace and event space – making it the perfect home for the Festival’s Mardi Gras. Non-stop entertainment and a party atmosphere abound, as a host of bands perform on multiple stages, bringing Dixieland, funk, soul, and brass band music to the heart of Edinburgh. Many of these bands showcase their concerts taking place in the festival and so the Mardi Gras becomes the essential place to get a feel for which tickets to snap up over the rest of the celebrations.

And the Edinburgh Festival Carnival 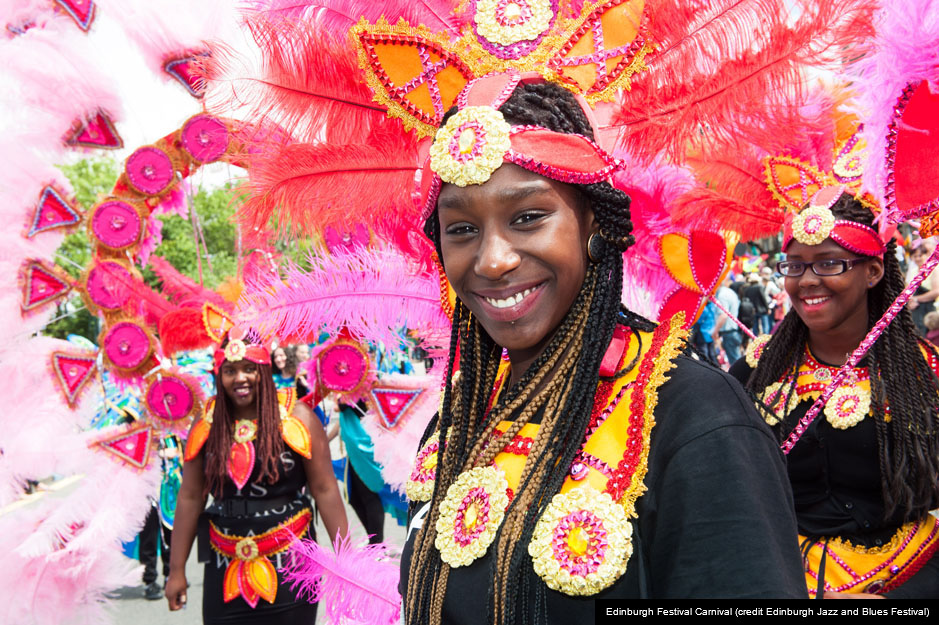 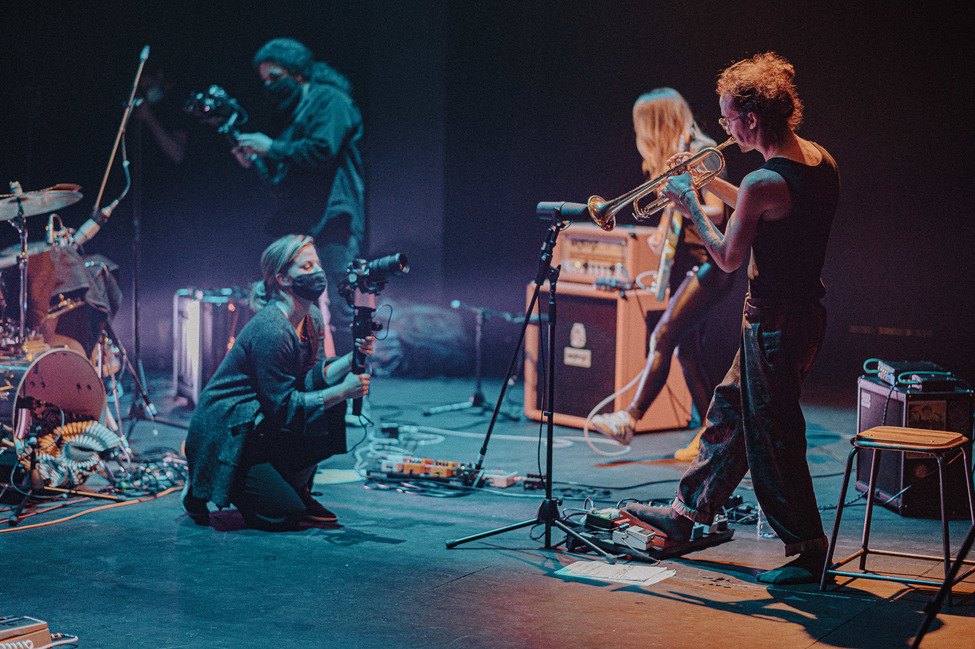 And if you can’t join us in person don’t worry. During the last few years, the Festival has developed a strong online presence and a new edition to this year’s festival is the EJBF22 ONLINE programme. Across the 10 days the Festival will be broadcasting some of the finest jazz and blues artists to living rooms worldwide - a mix of live streamed events and digital exclusives, plus a host of behind-the-scenes content. Amongst the digital exclusives is a concert from their San Francisco partner SFJAZZ, an original set of music inspired by the unprecedented political polarisation and upheaval we are facing in our daily lives.

The Edinburgh Jazz & Blues Festival runs from Friday 15 to Sunday 24 July, and full programme details can be found HERE.