On what would have been the closing night of the 2020 Royal Edinburgh Military Tattoo – and to look ahead to the future – the team decided to mark the occasion in the only way they know ….by creating a special socially distanced performance featuring Pipers Trail, Tattoo Dance Company and Hjaltibonhoga. Plans are already underway to make the Tattoo’s live show an unforgettable experience for audiences in 2021, with tickets due to go on sale in October this year. You can register your interest in tickets for the Tattoo’s spectacular return to Edinburgh now by completing your details in our sign-up form. Or if you’re one of our transfer ticket holders, you’ll gain priority access to the 2021 tickets when sales go live. 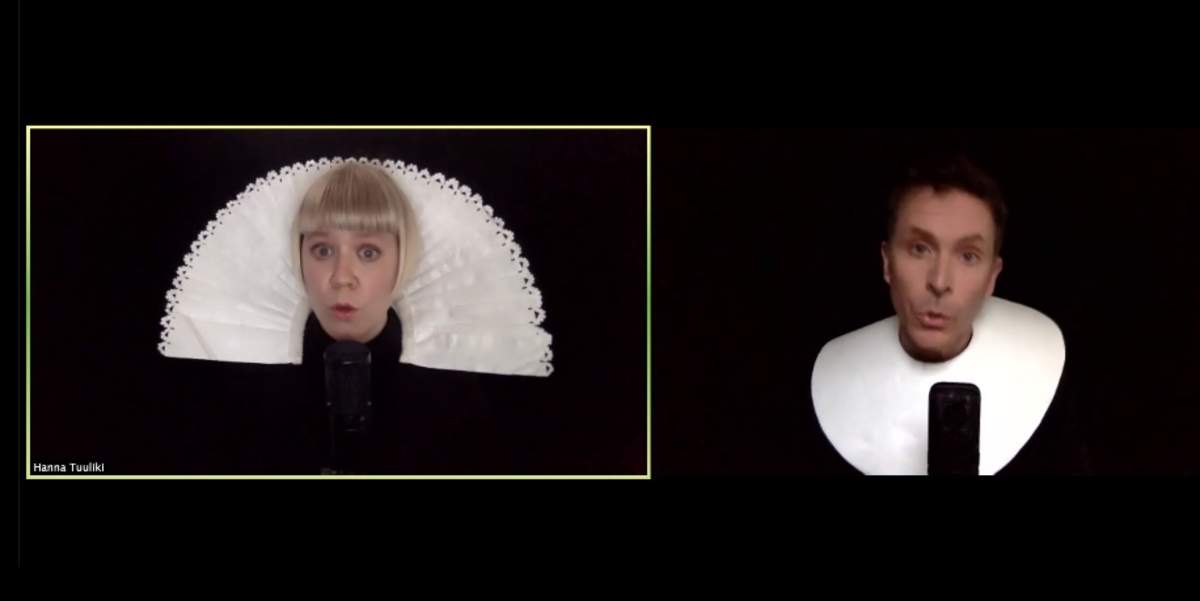 Forming part of a series of responses marking the intended dates of the 2020 edition of Edinburgh Art Festival, Hanna Tuulikki presented a sold out live performance with collaborator Daniel Padden, of 'SING SIGN: a close duet' originally devised for one of Edinburgh's historic 'closes'. The work looked to the performative possibilities of the digital technology which has become such a critical tool for us all in recent months, with a particular challenge being how to ‘hocket’ – the musical device used in the original work where the melody is spilt between two voices – across zoom. Speaking ahead of the event Hanna said: ‘Revisiting SING SIGN in this strange period of physical distancing, the work reminds me just how much I miss the intimacy of real life interactions.’

As a part of My Light Shines On, the Edinburgh International Festival commissioned a celebration of the grit, calibre and charisma of Edinburgh’s grassroots music-making. Aidan O’Rourke - the multi-award-winning fiddler, composer, producer, curator and one third of Scotland’s most inventive folk band, Lau – gathered together a host of world-class folk and jazz musicians with long connections to the city in Leith Theatre. The resulting performance, presented online, includes stripped-back solos and new collaborations from pioneering young Skye piper Brìghde Chaimbeul, whose acclaimed debut album The Reeling was produced by O’Rourke. Plus ney player Bashir Saade, guitarist Graeme Stephen, singer-songwriter Rachel Sermanni and of course O’Rourke himself on fiddle. As critic Jim Gilchirst said: ‘[the musicians] unhurriedly but potently generated a musical radiance to transcend the “ghost light” of a darkened Leith Theatre.’

4. A Sense Of Belonging 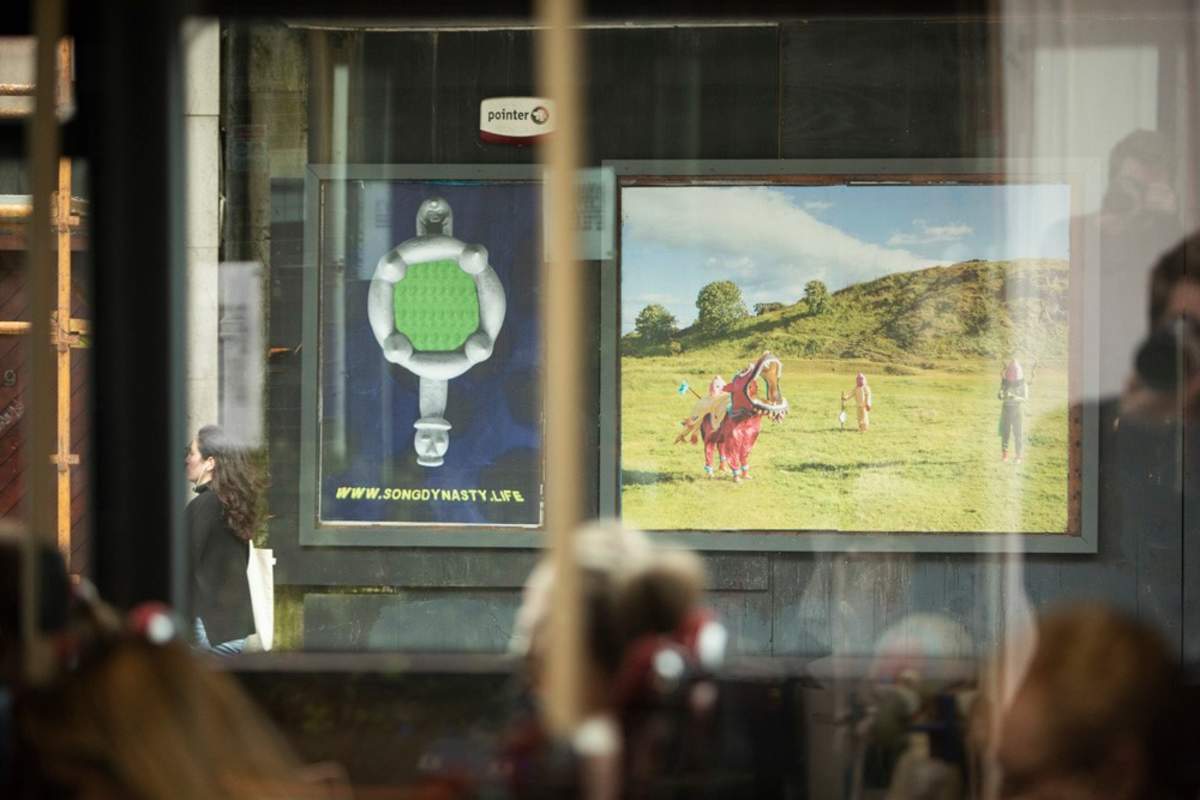 Adding to an ongoing familial collaboration, Rae-Yen Song’s 'Song Dynasty' has been presented both online and as a poster site in the city chosen for its special connection to the artist’s family. The work draws on autobiography and fantasy to speak broadly and politically about foreignness and what it means to belong, or not. Visitors to songdynasty.life stumble on an inscrutable ritual, encountering a small group of costumed figures in the landscape, as they undertake a slow and seemingly eternal, circular procession. Colourful, humorous, yet disconcerting, Song’s figures occupy the digital realm, but by also appearing elsewhere as a poster in the city, they reinsert themselves into the physical fabric of our lives and bring their unyielding gaze to a multitude of potential public encounters.

With With a recent report showing only three EU countries on track to meet their 2015 Paris Climate Change commitments, why do Christiana Figueres, the former UN Secretary for Climate, and Tom Rivett-Carnac, a senior political lobbyist for the UN Framework Convention on Climate Change - both architects of that Paris Agreement - find themselves feeling optimistic? That was the basis for this enlightening event. With next year’s COP26 in Glasgow standing as a make or break moment, Figueres and Rivett-Carnac talked to New York Times international climate reporter Somini Sengupta about the practical ways we can empower ourselves, drawing from their manifesto The Future We Choose: Surviving the Climate Crisis. This event was part of the ‘Making Climate Change Personal’ festival theme where authors, activists, environmentalists and naturalists have made it personal. 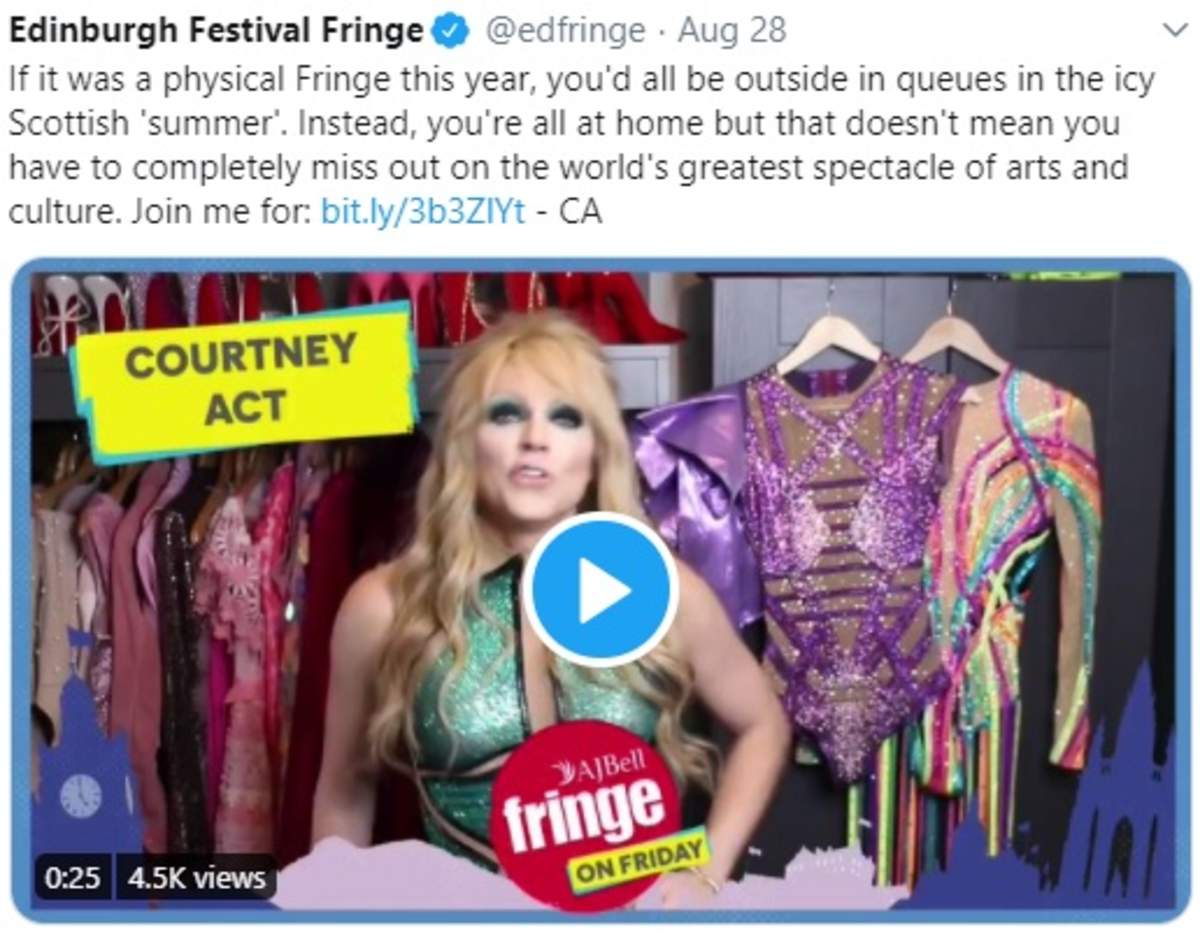 This weekend saw the final AJ Bell Fringe on Friday which helped the FringeMakers fundraising campaign, delivered in partnership with Crowdfunder, achieve its fundraising target of £200,000. The money will be used to help artists and venues return to the Fringe in 2021, and to mitigate some of the devastating impact that covid-19 has had on the festival and the wider arts sector. Hosting the final event was drag queen, pop singer and entertainer Courtney Act who welcomed appearances from Briefs, Le Gateau Chocolat, Stiff & Kitsch, Megan Shandley, Kid X, Farr Out, Craig Hill, Michael Odewale, Helen Duff and Alfie Ordinary. In addition, Courtney took the @edfringe Twitter account throughout the show – interacting with viewers and commenting on the acts. 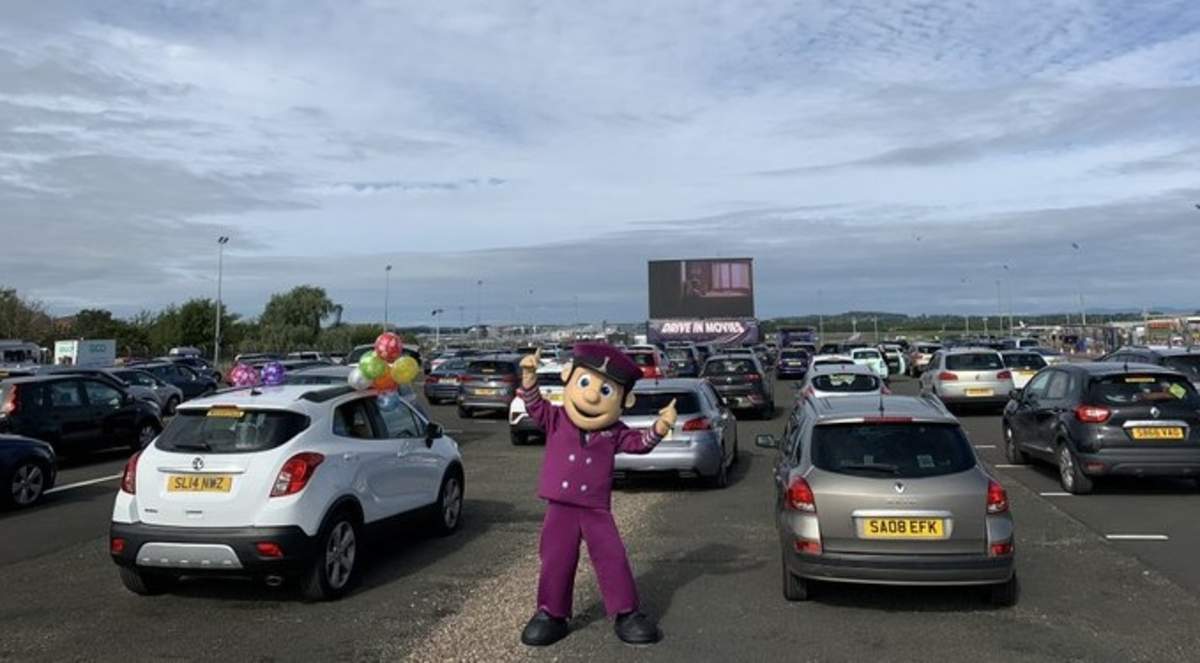 This weekend audiences turned on their engines, fastened their seatbelts and headed out to Edinburgh Airport for Drive In Movies. Edinburgh International Film Festival and Unique Events, the team behind the capital's successful 'Film Fest in the City' outdoor cinema events, teamed up to produce a special event for those missing their regular cinema outings. The film loaded weekend saw up to four screenings per day starting with a Kids Club at 10am, then Family Favourites in the afternoon, followed by an evening Blockbuster and then late-night screenings of Cult Classics. And that’s not all. Audiences arrived up to one hour prior to the film’s start, to take part in a car disco with a playlist relating to the screening, along with an interactive on-screen quiz with spot prizes.

Mahler’s Seventh Symphony takes us on a journey from fading dusk to a bright new day – an apt choice for the Edinburgh International Festival online programme given the world we now live in. In this unique performance, filmed in the city’s Festival Theatre with the players socially distanced from each other on a well-extended stage, the Royal Scottish National Orchestra were led by Music Director Thomas Søndergård, making his Festival debut, and joined by celebrated Scottish mezzo soprano Karen Cargill for three of Mahler’s wistful Rückert-Lieder. These unique performances for film reflect on what it means to keep a hopeful light burning in dark times, a point which was not lost on critic David Smythe who commented: ‘The players’ sheer enjoyment of making music together again was wonderful to watch.’ 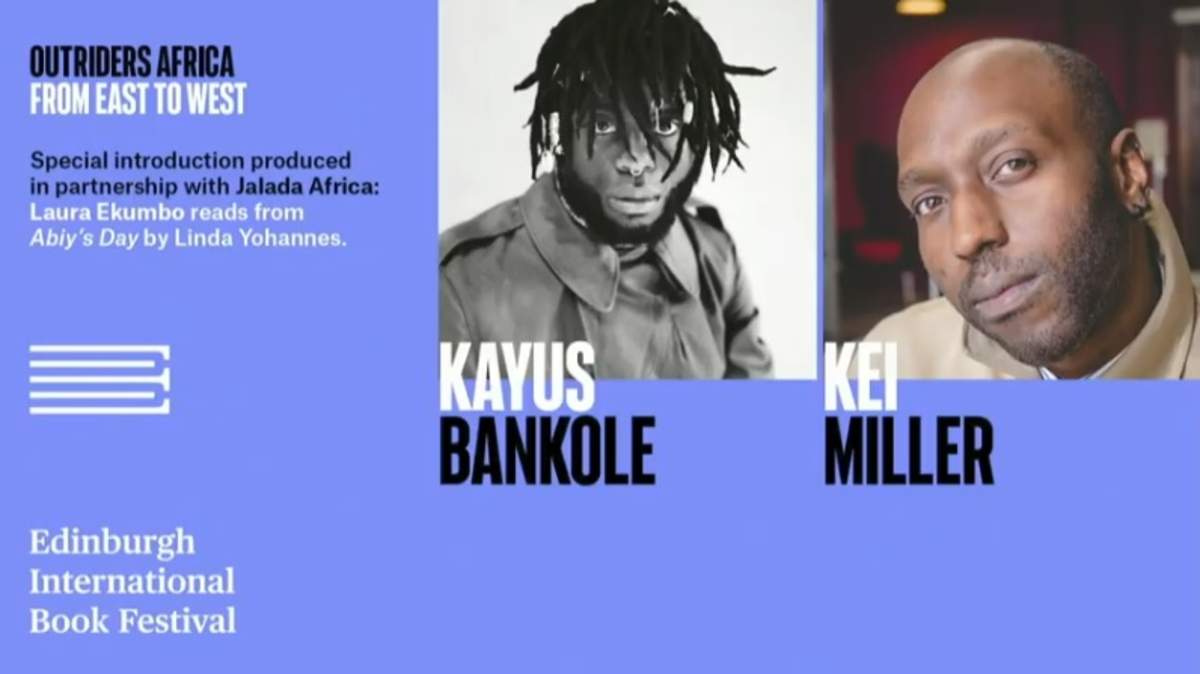 As part of the Book Festival's Outriders programme – supporting ten writers on a journey through Africa - award-winning writer Kei Miller was joined in this special podcast by writer-musician Kayus Bankole, a founding member of Edinburgh’s own Mercury Prize-winning band Young Fathers. Returning from their trip to Africa just before the global pandemic struck, they found themselves with plenty of time to reflect on the journey they embarked on together across Ethiopia and Ghana. Contrasting the spiritual home of the Rastafari in Ethiopia with their ancestral links to West Africa, Miller and Bankole recalled the people, religious sites and music that served as inspiration to them ever since and offered a sample of the work that has emerged from the experience – and which will be presented at the Edinburgh International Book Festival 2021. 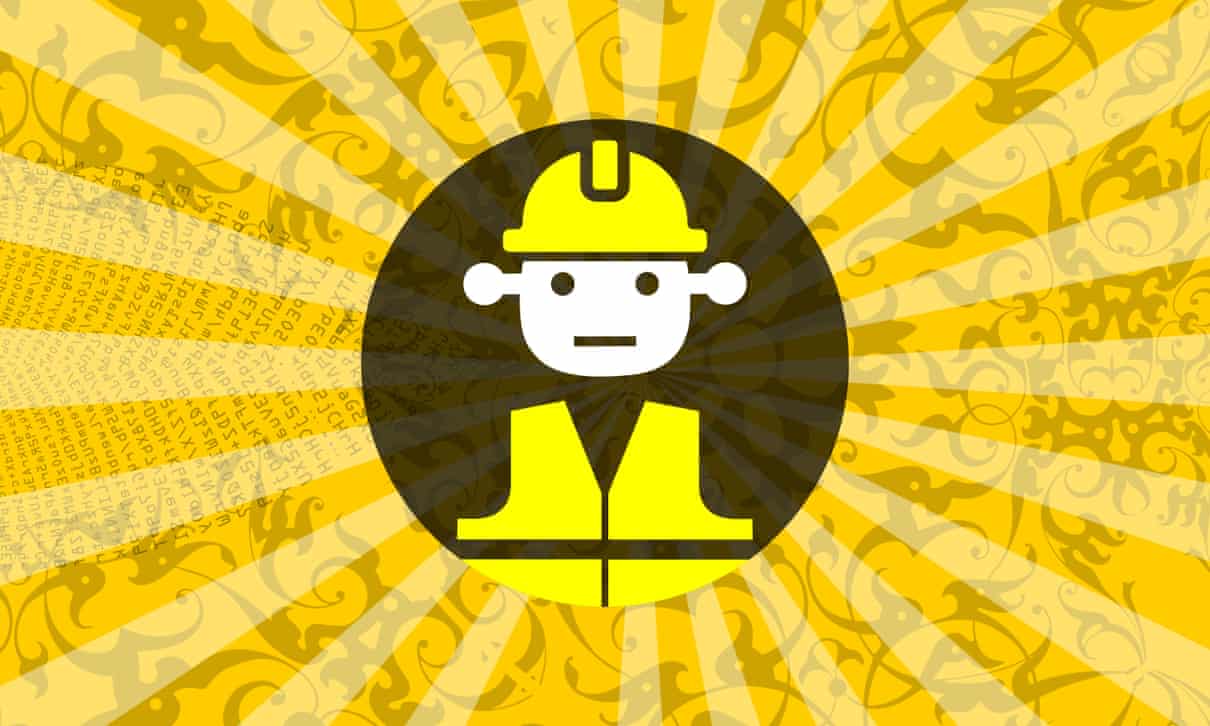 This weekend saw the final offerings of the world’s first AI generated arts festival, premiered for the virtual Fringe in the absence of the physical version. ImprovBot created over 350 event blurbs for an imagined Fringe, ranging from the bizarre to the hilarious – and were then given a playful take via Twitter by comedy troupe the Improverts. Invented by Melissa Terras to emulate the neural network of the brain, the ImprovBot software was programmed by Gavin Inglis to repetitively ‘mine’ the 100-word text descriptions of every fringe show from 2011 to 2019 as archived in the festivals joint listings API. This work is part of a wider research and development programme – Creative Informatics - which brings the city’s world-class festivals and tech sectors together to explore the creative challenges and opportunities.